David and Tamela Mann Prove the Faithful Can Thrive in Hollywood 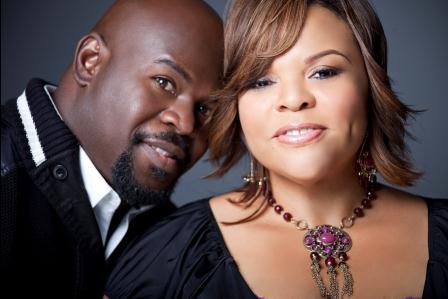 David and Tamela Mann have proven that faith, family and fame can coexist in Hollywood (Photo courtesy of Eurweb.com).

David and Tamela Mann are living witnesses to what God can do in someone’s life if they have faith and hope.

For the couple who have been married for 25 years, faith in God has taken their talents to the masses and made them international stars in music, film and television.

Despite their faith, David and Tamela Mann never envisioned being anything more than gospel singers praising the Lord; definitely not award-winning actors.

Nevertheless, their careers as thespians are a testament to God’s goodness and proof that anything is possible despite our current circumstances.

“It was all about faith and all about God in my mom’s house,” Tamela said about growing up in Fort Worth, Texas on their official website tillymannmusic.com. “We couldn’t listen to like R&B or blues. My mom would say, ‘You can’t listen to those blues in my house.’ She was really strict, but we listened to a lot of gospel music—The Clark Sisters, Andrae’ Crouch, Walter Hawkins, The Williams Brothers and Inez Andrews.”

With that upbringing, a career in gospel music was inevitable, but Tamela calls the acting “icing on the cake.”

However for her husband David, acting has been a part of his personality since the fourth grade, but not acting on a stage or in front of a camera.  He developed a reputation of acting “silly” while in elementary school.

Like most mothers, David’s mother warned him that people were not going to pay him to act silly, but he has definitely proven her and everybody else wrong with his iconic character Mr. Brown in the “Meet the Browns” franchise.

Tamela admitted that Mr. Brown is basically David in costume and she has to deal with his colorful antics on a daily basis in the Mann home.

David’s cutting up has led to fans cracking up with laughter for many years thanks to those Tyler Perry plays, movies and television episodes.

As a result of their success in all fields of entertainment, David and Tamela Mann have shown a new generation that a strong couple can make it in Hollywood despite the pressures of stardom in the same vein as Osssie Davis and Ruby Dee years ago.

Nevertheless, with success comes criticism and David and Perry have had their share of critics throughout their meteoric rise to stardom, whether fair or not.

“With the criticism, I always look at it like ‘you like one thing, I like some other things,’” David told Regal Magazine.  “So my type of comedy may not be for everybody.  And that’s the way I looked at it.  So when people criticize, it’s just not for you.”

Regardless, no one can criticize the positive contributions that David and Tamela Mann have made to an entertainment industry that seems to thrive off negativity and immorality.

In an era where very few songs tug at one’s heart and soul, it should come as no surprise that Tamela’s Grammy-nominated song “Take Me to the King” has become an instant classic amongst gospel music fans.

It especially resonates in a time when 20 innocent schoolchildren are murdered in an elementary school in Newtown, Conn.

The song reminds people that no matter how broken and downtrodden one becomes, God is still in control and blessings can come out of the gravest of tragedies and situations.

And David and Tamela Mann are living witnesses to what God can do in one’s life and circumstances with just a little hope and faith, which is something that is needed now more than ever.