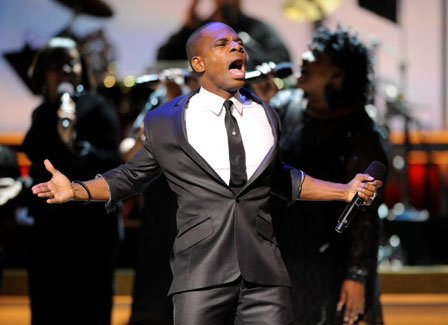 Kirk Franklin has increased the popularity of gospel amongst the youth (Photo by Phil McCarten/PictureGroup via AP Images).

Is the Younger Generation Smiling at Gospel Music?

When you see someone with abundance in their life and a smile on their face, and you ask them what their secret is, don’t be surprised if they turn around and tell you, it’s the God in me!

Thanks to Mary Mary’s smash hit, we all had a good song to groove to and at the same time, feel good telling people how God works in our lives.

Since the late 1990s, there has been a new wave of music that has banging beats, cool melodies, catchy lyrics, but loaded with the word of God.

Contemporary gospel music is meant to connect with a younger audience and get them away from hearing songs about drugs, money and sex, and help them with their daily problems by giving them a solution, God.

Thanks to contemporary gospel music, there was finally music that could compete with mainstream music and pull the younger generation closer to God. However, does the message behind the music actually work with younger audiences?

When Kirk Franklin’s “Stomp” popped on the charts, it had everybody talking, and the main question they were asking was “Stomp” a real gospel song? “It couldn’t be!” is what a lot of people were thinking because it sounded like hip-hop.

“Stomp” had younger people dancing, singing and most importantly, finally making it cool to be a Christian.

In the video was a younger fresher generation praising God and not afraid to show it, featuring Salt from the hit rap group Salt-N-Pepa rapping in the bridge. The younger generation started to identify with contemporary gospel music because of that 1997 hit, but is that still true in 2011?

He also says another reason it isn’t influencing the youth is, “The music isn’t very attractive to them and can’t compete against mainstream secular music.”

Can contemporary gospel music compete with secular music? Kirk Franklin has upped the ante with his latest rendition of the Tupac hit “Smile.” It has a catchy sound to it, a nice beat like secular music, but instead of talking about drugs and sex, he’s talking about when things look down, you can look up to God. But, does his latest attempt work?

“I had students come into my classroom singing ‘Smile’ by Kirk Franklin,” says Tenisha, a middle school teacher. “They are singing along but don’t understand what the song is really saying because it’s not in their hearts and spirit yet.

“If a child hears the word ‘Holy Ghost’ and nobody tells them what that is, then it’s just a lyric in a cool song. They can’t identify with contemporary gospel music because the media pushes secular music and they hear that music more than contemporary gospel music and unfortunately secular music is in their hearts and spirit because it’s in their actions.”

Marlon, an A&R rep says,” Kids today identify more with what’s going on in secular music because kids today are more advanced than we were 20 years ago. Kids see movies and ‘106 and Park’ with these songs in them all day long, and to them those songs relate to more of what they are going through.”

What are they going through? Years ago the biggest problems for our youth were graduating high school and picking a college, but today they are dealing with bullying, drugs, sex and gangs.  That’s a lot for any child to deal with.

Usually we are influenced by music, whatever type we listen to. Would listening to a song about God help them turn their life around and lead them to church? How do we get them to understand the words in contemporary gospel music instead of just singing along to a banging beat?

“Parents; if the kids had a Christian foundation and were taught from the Bible, when they hear the words they can begin to understand Christian lingo and how it can relate to their own life and what they are dealing with,” continues Tenisha. “Kids at my school are doing pills, and having sex on a regular basis and the high school kids are dealing with much more. Christians are losing the battle.”

Are we losing our youth? I did an experiment to see if the young kids today prefer contemporary gospel music or secular music. I asked four youth to listen to Kirk Franklin’s “Smile,” and Tupac’s version and asked them to give me their opinions.

“I can’t really identify with everything Tupac is saying in his version, but I identify with everything in the Kirk Franklin version,” says Nikki, a 19-year-old college student. “Since I have graduated from high school I don’t listen to rap as much. I mostly listen to contemporary gospel music because it helps me deal with what I’m going through as I become an adult.”

“I identify more with the Kirk Franklin’s version,” says Kathy, an 18-year-old recent high school graduate, “but I still prefer the Tupac version better, and it’s the one I would rather listen to.”

Chelsea, a 17-year-old, echoes the same thoughts as Kathy. “I understand more of the Kirk Franklin version and I like it, but I like Tupac’s song better, and I prefer secular music.”

How is it that they still prefer Tupac’s version when they identify more with Kirk Franklin’s version?

“I actually relate more to the Tupac’s version but I understand the contemporary gospel version,” says Trey, a 19-year-old.  “Whenever I hear a hit on the radio from a contemporary gospel artist I’m never inclined to rush out and buy their CDs. Their whole CD is pretty boring because every song is talking about the same thing, versus, a mainstream CD, which talks about so many other things dealing with life.”

Things have definitely changed in the lives of our younger generation, and the attempt to get them to listen to contemporary gospel music is failing.

Some say it’s the church’s fault for not supporting contemporary gospel artist and thus stopping them from reaching our younger generation. Some say it’s the media’s fault for saturating TV and movies with sex and pop stars, and not promoting gospel music and Godly things.

Regardless of the reason, music is influencing our youth and adults (especially the artists) have to decide whether that influence will be positive or negative.