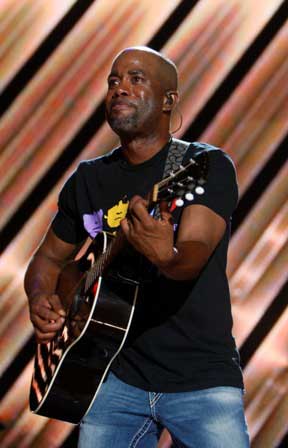 Black Country Singers: Can They Make It?

Having conquered the R&B, jazz, rock – even opera industries – African Americans seem to hit a roadblock in regards to country music. Can we make a lasting impact? Do we have what it takes to do so?

In 1926, DeFord Bailey broke racial boundaries when he became the first African American to appear on stage at the Grand Ole Opry, the very representation of country music.

It would take some 40 years before another African American made such an impact. It was 1962 and Ray Charles, although primarily an R&B artist, released the groundbreaking album “Modern Sounds in Country and Western Music” featuring the number one hit “I Can’t Stop Lovin’ You.” The tune made Charles a household name in country-lovin’ homes all across America. To emphasize its massive appeal, it is among Rolling Stone’s 500 Greatest Songs of All Time, as well as the 100 Greatest Songs in Country Music.

That same year the legendary Nat “King” Cole cut a tune called “Ramblin’ Rose,” which became the second country hit by an African American in the genre.

But it wasn’t until the mid-60s when a young Charley Pride caught the attention of record producer Chet Atkins that Black country singers were taken seriously. Marketing Pride simply as “Country” Charley Pride, Atkins had no photos distributed of the African American baritone. Rather, he would let the music speak for itself.

A country star was born. Before the predominantly-White country-music-lovin’ population knew what hit them, they’d bought his records, requested radio air play and made him one of the top artists for RCA Records – second only to Elvis – during Pride’s heyday in the early- to mid-70s. The strategy worked: to date, Pride has sold over 70 million records, is inducted in the Grand Ole Opry and today is arguably one of the best country singers of all time – Black or White.

There have also been other “crossover” African American artists who have made an impact on country music, such as The Pointer Sisters (“Slow Hand”); and Lionel Ritchie (who collaborated with Kenny Rogers and is credited with such hits as Rogers’ “Lady” and “Through the Years,” among other country tunes).

And lesser known Black country singers have certainly put forth great effort. In the late 90’s, Trini Triggs made a few waves on the country music scene. At first glance it seemed as if the attractive cowboy was going to strike gold, but just a few short years later and his star has yet to reemerge. In fact, his Wikipedia page lists minimal information and his Web site simply states, “Coming soon.” But when?

In the past several years, chart-topping African American artists from other music genres have segued into ‘country’ territory. One such surprising collaboration involves hip-hop artist Nelly who collaborated with top-country performer Tim McGraw on the catchy tune “Over and Over,” which received air play on both R&B and country stations throughout the U. S.

Cowboy Troy is also making a name for himself by blending country music with rock and hip-hop to form a unique sound all his own.

But the most popular of all Black country singers today is the multi-talented Darius Rucker, former lead singer of Hootie and the Blowfish. Rucker, who decided to ‘go country’ just a few short years ago, has made a seamless transition from rock music to country music in a few short steps. In 2008, Rucker became the first African American since Charley Pride to reach Top 20 on the country charts with his “Learn to Live” album. And his single, Don’t Think I Don’t Think About It,” reached number one in September of that year, making him the only African American since Pride to reach that status.

With his appearance at the Grand Ole Opry and his album going platinum in 2009, Rucker is well on his way to country stardom.

African Americans are resilient and multi-talented. It is no longer of question of ‘whether’ we will prevail in country music but rather ‘when.’ As those before us (Pride, Charles, Cole and others) have indicated, we have what it takes to get there. And with today’s star on the rise (Rucker), Black country singers shall remain.