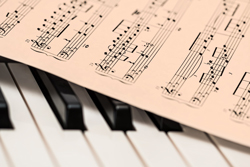 Pianist Alexis Ffrench is determined to take classical music to the masses.

“I had a message the other day that said, ‘When life gives you lemons, listen to Alexis Ffrench,’ so there’s a sense that my music has found a place where people need to be consoled—for some kind of spiritual pick-up.”

That quote from the United Kingdom based musician encapsulates his influence on classical music in 2018.

The music that the classical pianist creates soothes the soul and connects with fans of all music genres, not just those who traditionally listen to classical.

Classical music stereotypically represents the bourgeoisie of society, regardless of color, creed or ethnicity.

When people think of classical music, many usually think of tuxedos, operas, evening gowns and the elite of the elite.

Now, the British-bred pianist can boast of 100 million streams and 1.5 million active listeners per month.

His fans typically range from age 25 to age 35.

“Streaming has changed the music industry radically and has ushered in a real shift for consumers, curators, musicians and record companies. The ‘Relaxing Classical’ playlist has become ubiquitous and people are turning to these classical playlists, in particular to decompress and unwind.”

Earlier this year he signed with Modest! Management, the home of pop stars like Niall Horan of One Direction, Little Mix and Olly Murs.

Ffrench now plans a show at Bush Hall in London to promote his number one album, “Evolution.”

“It’s going to be a huge album in terms of its broad appeal and the way it crosses over all genres to reach all audiences,” he said.

The album is, “Conventional and unconventional, there’s something for everyone on this record. ‘Reborn’ is the first track on the album and a grand gesture if I’ve ever seen one. It involves a lot of moving parts in the orchestra and feature harp.

“‘Exhale’ is similar to this in that you can actually hear what a great musical partner he is. The way he’s so involved in the playing of others around him allows him to ebb and flow with them seamlessly.

“His background in classical music (a graduate of the Prestigious Royal Academy of Music in London) is apparent here in that he knows how to set an orchestra so that it’s not so overpowering while still carrying some weight.”

This year, he has also performed at Latitude Festival, which usually caters to pop music, and that the 2018 Classical Brit Awards.

Ffrench lists artists like Stevie Wonder and Bob Marley as his musical influences.

The reggae influence of Marley probably can be attributed to his parents who immigrated to Europe from Jamaica.

The pianist began showing signs that he was a musical prodigy as a toddler.

“When I was four I started playing on the dining room table, because we didn’t have a piano,” he said.

In his mind, Ffrench was performing the music of Wonder and Marley that he listened to from his father’s album collection, in his head.

“That was a theme of my young life: knowing music before I was taught music. I remember (my parents) saying: ‘He thinks he’s Mozart…’ They bought me a piano—a battered old thing, which arrived on the back of a truck. My parents quickly realized I could play anything I could hear; I had perfect pitch.”

His ability on the piano allowed him to study at some of the best schools in the country.

And like many Black musicians, Ffrench honed his talents at church, playing every Sunday as well as weddings and funerals.

Ffrench explained, “That informed my ability to improvise. One Christmas my dad asked if I could incorporate his favorite song, Johnny Mathis’ ‘When a Child is Born,’ into the church’s processional music.”

As a result, the classical pianist also considers hip-hop musicians such as Snoop Dogg and Childish Gambino (aka Donald Glover), and culture as an influence.

Ffrench has also created headlines recently by saying that classical music needs to learn from hip-hop as it pertains to pushing boundaries and “doing daring things in the name of art.”

His upcoming video for “At Last” contains hip-hop flavor.

Ffrench labeled the upcoming video as “daring” and says, “It’s something that hasn’t been done before.”

One of Ffrench’s goals is to make classical music more accessible, inclusive and relevant than it has been in popular culture.

Ffrench said, “I was watching the Last Night of the Proms recently and was struck by the lack of diversity in the audience. The next day a commentator said: ‘Who says classical music is dead?’ and I was taken aback as I feel there is no room for complacency in this regard. Where classical music is concerned, we still have major barriers. It’s incredibly important to me, and I feel we all have a duty to speak out and encourage positive change.

“In the near future, I would love to look out at Last Night of Proms and see a welcome mixture of White, brown and Black faces, with people of all backgrounds. That would prove to me that classical music is alive and adaptable and I see myself as an artist who can help lead the change.”

With his self-proclaimed “classical soul” style, Ffrench just might be the artist to bring classical music down from the ivory tower and to the masses.

Ffrench said, “I want to democratize classical music and create a ‘borderless’ landscape in which there are no barriers. I definitely think this can be achieved and I would like to lead that charge.”