Brothers from the Hood Strive as Classical Pianists 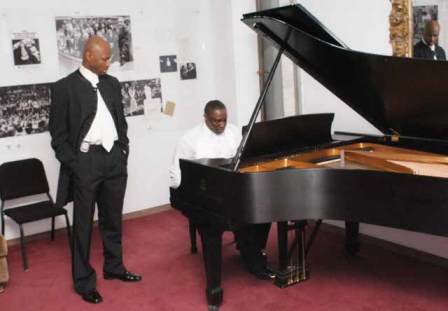 Who ever heard of proactive sibling rivalry? Well, until you have spoken to or heard classical pianists Nerva and Robenson Altino you would not believe it existed.

Lacking all the negatives in the phrase, these two classical pianists are brothers, born in the independent nation of Haiti, but raised in South Jamaica, New York, who enjoy and complement each others performance style.

“Our late mother always told us that we only had each other and to be sure to look after and support one another and we never forgot that advice,” says Nerva, the oldest who is more into the 19th century composers with a less aggressive style, while Robenson is more aggressive and prefers 20th century musical giants.

“What makes us unusual, aside from the fact that having two classical pianists in one family is rare, is that we were raised in the ‘hood,’ so our exposure included a wide range of musical forms including hip hop, R&B,” adds Nerva. “Our father made sure that we also were acquainted with classical music and performances of musical geniuses including Beethoven, Bach as well as African American musicians, including my favorite Ray Charles.”

They both relate to classical pianist and composer Franz Liszt and the lesser known American classical pianist Julius Katchen.  “Katchen brought his own style to the classics and made the performances his own,” notes Robenson. “He was a contemporary performer and brought new audiences into this musical arena and that is what we want to do.”

Both brothers are focused on expanding the reach of classical music appreciation into the next generation. “We want to ‘jazz up’ the classics in a way and to inspire young people to follow their heart,” adds Robenson. “We know that to truly be good at anything takes practice and discipline and for those who love music, it becomes a part of your life to do it well and to bring that experience to others.”

The brothers have received rave reviews not just as interpreters of the Classical masters, but for their virtuosic and creative original renditions of church hymns and popular tunes.

“As Seventh Day Adventists, we believe in sharing our gifts as ministers of music and the greatest blessing to us is returning to a school where we performed and lectured to find out that a number of the students decided to pursue music education and showed commitment to the effort,” states Nerva.

Having toured major cities in the United States including New York, Chicago, Atlanta and Boston, the Altino brothers are gearing up to tour abroad, including a special performance in Haiti to showcase their classical pianist talents and full musical repertoire.

“We had plans to go there before, but they fell through so we are still hopeful that we will be able to perform there and to bring much needed encouragement,” notes Robenson. “To be able to show our talents and to motivate others is something that we have envisioned doing on a global scale because music really is a universal language.”  For more information about the Altino Brothers, check out their website at www.thealtinobrothers.com.