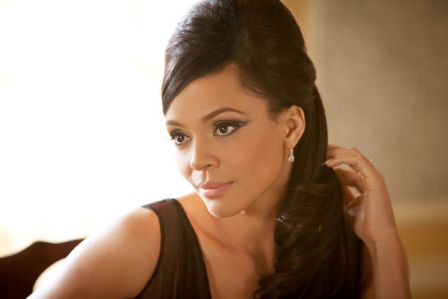 Simply put, too many women fit the bill for what Regal Magazine labels as beautiful.  The 12 most beautiful women of 2012 all epitomize various facets of beauty and epitomize the perfection of God’s greatest creation: the woman.

However, new rules were implemented to ensure that every queen gets her time on the Regal throne.

Nobody can make the list for two consecutive years so 2011’s honorees were eliminated.  So our apologies to Halle Berry, Stacey Dash and Beyonce’, but please step aside for a new list for our most beautiful women of 2012!

12. Elle Varner: Songstress Elle Varner gave everyone a refill of beauty in 2012 and that is why she is number 12 on our list of most beautiful women of 2012.  For a child that grew up in recording studios, thanks to her songwriter parents, the 22-year-old’s musical ascendancy should not be a surprise to anyone.  The lessons she learned observing her parents were fully realized with the release of her critically acclaimed debut album Perfectly Imperfect.  Born in Los Angeles, and now residing in Brooklyn, N.Y., Varner first started showing vocal talent while singing in the church choir.  Now, fans cannot get enough of her sultry sound and are constantly trying to get a refill of her talent.

11. Crystle Stewart: It’s not like she’s Miss U.S.A. or something.  However, in the case of Crystle Stewart she was named Miss U.S.A. in 2008.  The Missouri City, Texas native and University of Houston graduate showed that she was more than just a pretty face with her popular role in the TBS sitcom “Tyler Perry’s For Better or Worse,” starring as Angela’s (Tasha Smith) best friend.  Stewart also took her talents from the small screen to the big screen, appearing as a secretary in Tyler Perry’s Good Deeds.  It is only a matter of time before Perry makes her the next big star in urban Hollywood.

10. Tika Sumpter: If you were a fan of ‘The Game,” you already knew Tika Sumpter.  If you were not a fan of the popular BET sitcom, you most definitely know her after her performance as the beautiful, medical school-bound Dolores in Sparkle.  The Queens, N.Y. native held her own against the likes of Whitney Houston in the remake of the cult classic and her resume shows she can hold her own against all of Hollywood’s best like Angelina Jolie as evident in Salt.  Sumpter also sparkled in the instant classic Think Like a Man and 2013 will be even brighter as she stars in the films Ride Along and My Man is a Loser.

9. Shaun Robinson: Feeling beautiful often begins with high self-esteem, and Shaun Robinson is dedicated to using her celebrity status to increase the self-esteem of girls across the world.  The Detroit native and Spelman College alum began her career as an award winning reporter and anchor in cities from Austin, Texas to Miami.  Robinson is now a fixture in the entertainment side of the news, serving as the weekend anchor and correspondent for “Access Hollywood.”  In 2009, she authored the book Exactly As I Am: Celebrated Women Share Candid Advice With Today’s Girls On What It Takes to Believe in Yourself.  She is also the spokesperson for “Share Your Heart, Share Your Home” program in Los Angeles County, which helps find permanent homes for minority children waiting for adoption.  Helping parentless children and helping young girls recognize their true beauty makes her one of our most beautiful women of 2012.

8. Jordin Sparks: “American Idol” was just a steppingstone for songstress Jordin Sparks.  As a 17-year-old she was the “American Idol” winner in season six.  Sparks holds the distinction of being the first biracial winner of the show, according to imdb.com.  In 2008, she transitioned from reality show winner to pop sensation with the hit “No Air” featuring Chris Brown.  The video for the song placed 16th in VH1’s top 40 videos of 2008 and “Battlefield” ranked 17th in VH1’s top 40 videos of 2009.  The Glendale, Ariz. native was influenced by such singers as Mariah Carey, Beyonce’ and Justin Timberlake and in 2012 she followed in their footsteps by becoming a bona fide movie star with her role as the lead character in the remake of Sparkle, which featured another influence, the late Whitney Houston.  If the past is any indication, look for Sparks’ career to sparkle for years to come.

7. Lolo Jones: Track and field is always popular amongst men during the Summer Olympics, but the 2012 games in London were must-see TV for many men because of one of the most beautiful women of 2012, Lolo Jones.  The LSU graduate is known not only for her physical beauty but also her fortitude because she continues to strive for her dreams of an Olympic medal after countless disappointments.  In the 2008 Olympics, she was favored to win the gold in the 100 meter hurdles, but fell short when she clipped the ninth hurdle, dropping her to seventh place.  She vowed to atone for that disappoint in 2012, but failed to medal again.  However, she continues to persevere and has recently been named to the United States bobsled team, which will compete in the upcoming Winter Olympics.

6. Alicia Keys: Alicia Keys has been on fire her entire singing career.  The talented musician burst onto the music scene in 2001 with her debut album Songs in A Minor and has not looked back since.  Keys followed her debut success with follow-up studio albums The Diary of Alicia Keys, As I Am, The Element of Freedom and 2012’s Girl on Fire.  What makes Keys beautiful is that she realizes the purpose behind her God-given gifts and uses her celebrity to make a difference in the world with programs like “Keep a Child Alive,” which provides medicine to families with HIV and AIDS in Africa.  That type of philanthropy will always be beautiful and that is why Keys makes the list of most beautiful women of 2012!

5. Kelly Rowland: Kelly Rowland is fulfilling her destiny as a solo artist.  The Houston native spent the majority of her career in her friend Beyonce’s shadow as a member of the girl group Destiny’s Child, but began stretching her solo wings in 2002 with her solo debut Simply Deep, which featured the hit duet “Dilemma” with Nelly.  And she is determined to make 2013 the Year of the Woman and is off to a good start thanks to the single “Ice” featuring Lil Wayne.  Rowland showed her acting chops in the 2004 film Seat Filler and proved her longevity on the big screen with the 2012 hit Think Like a Man.  And although Beyonce’ was the focal point of the group, Rowland is consistently showing that she has what it takes to go from child group star to solo adult star.  Her independence is why she makes the list of most beautiful women of 2012.

4. Cissy Houston: Cissy Houston was already a legend in gospel music before her iconic daughter Whitney blessed the world with her voice, but her beauty, dignity and grace was never as evident as it was in the aftermath of her daughter’s untimely death in February.  A parent should not bury their child, but Houston maintained her regal aura and showed why her family has been able to muscle past all of life’s trials and tribulations.  Who will ever forget her heart-wrenching performance of “Bridge Over Troubled Water” at the 2012 BET Awards?  For that fact, she is hands down one of the most beautiful women of 2012.  The aunt of Dionne and Dee Dee Warwick is known for such gospel classics as her rendition of “The Lord is My Shepherd” from The Preacher’s Wife Soundtrack and ‘The Lord Will Make a Way Somehow.”  The singer is also now a reality television star in “The Houston’s: On Our Own,” which also stars her granddaughter Bobbi Kristina.

3. Kerry Washington: Actress Kerry Washington should cause no scandal amongst Regal readers for making the list of most beautiful women of 2012. The George Washington University educated thespian, who stars as crisis management guru Olivia Pope, has already turned the ABC produced drama “Scandal” into a ratings phenomenon and cult classic amongst its fans.  Washington seems perfect for the role of the brilliant Pope as she was accepted into both Yale University and Dartmouth College coming out of high school in 1994.  She stole moviegoers’ hearts with her role as Della Bea in the biopic Ray and captured our soul in For Colored Girls and the Why Did I Get Married franchise.  On Christmas, she will have moviegoers spellbound again with her role as Broomhilda in Django Unchained; and 2013 looks just as bright as she reunites with Tyler Perry in the anticipated film We the Peeples.

2. Jennifer Hudson: 2012 might not have been the busiest year for Jennifer Hudson on wax or on the big screen, but her beauty does not need constant exposure.  For that reason, she is number two on our list of the most beautiful women of 2012.  She delivered a smash hit with Ne-Yo on the title cut to the movie Think Like a Man and did her thing as Sister Rosemary in The Three Stooges.  Hudson also became the spokesperson for Weight Watchers, showing that beauty comes in all shapes, sizes and colors.

1. Carmen Ejogo: Carmen Ejogo was simply one of the sexiest “sisters” of 2012.  She lit up the screen and stole the show as Sister in Sparkle, which gave the talented actress center stage on the big screen and deservedly so.  The London-bred actress rose to international acclaim as Eddie Murphy’s lover in the 1997 film Metro.  The actress is versatile to say the least, starring as Sally Hemings in the television miniseries Sally Hemings: An American Scandal and Coretta Scott King, alongside husband Jeffrey Wright, in the HBO film Boycott.  Ejogo further etched herself into 2012’s yearbook by playing Tyler Perry’s devoted wife in Alex Cross.  If this year was any indication, it will not be along until Ejogo is a household name and a regular on the awards circuit.  Simply put, there is no list of beautiful women of 2012 without Ejogo on it.