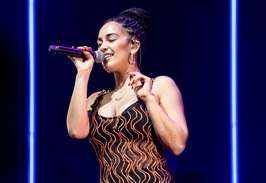 R&B songstress Jorja Smith blew up in 2018 with her debut album, “Lost and Found.”

Do you remember the time when Black women had very little opportunity in the entertainment and political industries?

Sure, the entertainment industry and political arena will never reach perfection, but Hollywood and Washington, D.C. have experienced the total takeover known as Black Girl Magic.

Therefore, RegalMag.com has found it easier to come up with its most beautiful women of the year list as time goes by.

In actuality, RegalMag.com finds it harder because there are so many beautiful, politically powerful and talented Black women to choose from annually.

Did you notice the use of Black and not African-American?

That is because so much Black Girl Magic is coming from across the pond that the R&B world experienced its own British invasion thanks to British songstresses like Jorja Smith and Ella Mai.

With such enormous success in 2018, choosing Smith and Mai for RegalMag.com’s list of the most beautiful women of 2018 was a no-brainer.

However, beauty is not enough to crack the list of the most beautiful women of 2018.

Over the past year, each woman chosen had to have had enormous success in the entertainment, business or political arenas.

Their impact in their profession is what is truly beautiful to the staff at RegalMag.com.

Furthermore, no woman can make the list of the most beautiful women for two consecutive years.

So without further adieu, check out our list for the most beautiful women of 2018, in no particular order.

Click the links for more information about each woman.

Tarana Burke—Sure, the #MeToo movement gained its steam in 2018. And yes, many people credit actress Alyssa Milano for popularizing the movement, which aims to stop sexual harassment and sexual assault of women in the workplace and in society at large. But, it was a Black woman named Tarana Burke who started the #MeToo movement in 2016. As a result of Burke’s movement, hopefully the workplace and beyond will continue to become safer for all people, women and men.

Michelle Obama—The world should have known that the former First Lady’s memoir “Becoming” would be good because we know the Chicago native is a great writer. Obama is so good as a writer that not only did current First Lady Melania Trump steal her speech almost verbatim, but “Becoming” sold over two million copies in 15 days. Her memoir is selling at a faster pace than the memoirs of former President George W. Bush, former President Bill Clinton and former Secretary of State Hillary Rodham Clinton.

Jorja Smith—Urban music fans across the globe knew that 2018 would be a monster year for Jorja Smith after her appearances on the “Black Panther Soundtrack” and Drake’s playlist, “More Life.” With two of the biggest names in hip-hop, Drake and Kendrick Lamar, putting you on, how could you fail? Well, Smith definitely did not fail. Not only is Smith a great singer, she is also a great songwriter and businessperson. She penned the majority of her songs on her debut album, “Lost and Found.” And she put older singles on the 2018 album like “Blue Lights” and “Teenage Fantasy” knowing that people new to her music might not have heard those songs in the years of their releases.

Ella Mai—Like Smith, anyone with ears knew that 2018 would become a gigantic year for Ella Mai. Even before she released her self-titled debut album, this year already belonged to her thanks to her relationship anthem, “Boo’d Up.” The success of that single led to a gig opening up for pop sensation Bruno Mars on his “24K Magic Tour.” And her 2018 album showed that Mars is not the only icon that loves Ella Mai. The album includes collaborations with Chris Brown, John Legend and H.E.R.

Corinne Foxx-Wasn’t it like yesterday that Jamie Foxx’s daughter was a preteen? The little kid that accompanied him to those award shows during the year that “Ray” and “Collateral” received so many award nominations cannot be a grown woman already, can she? Well she is and the 24-year-old is carving out her own niche in Hollywood by modeling and appearing on television shows like “Beat Shazam.” Foxx has also worked as a special correspondent for “Entertainment Tonight” and served as “Miss Golden Globe 2016.”

Nessa-Radio personality Nessa is the definition of a ride or die chick. Not only is she beautiful, but also she has a backbone, holding down former NFL quarterback Colin Kaepernick as he continues to battle police brutality, system racism and the NFL. The New York radio personality probably took some heat from advertisers because of her relationship with Kaepernick. But she continues to speak truth to power. While Kaepernick speaks rarely, Nessa speaks often calling out anyone who speaks negatively about Kaepernick and his movement.

Zoe Kravitz—You know you are getting old when you can remember when Lisa Bonet was the Beyoncé of her day to quote Jay-Z. Now Bonet’s daughter Zoe Kravitz is the Bonet of her day, looking just like a younger version of her mother and boasting the same acting talent. In 2018, the daughter of rock star Lenny Kravitz appeared in movies “Kin” and “Fantastic Beasts: The Crimes of Grindelwald.” She also voiced the character Mary Jane in “Spider-Man: Into the Spider-Verse” this year.

Cynthia Erivo—Actress Cynthia Erivo had a great 2018 starring in “Widows” and “Bad Times at the El Royale.” But this year might just be the tip of the iceberg for this multitalented star. She sings. She acts. And she dominates the movie screen even when starring opposite some of the biggest names in Hollywood. Next year should bring more stardom for Erivo as she stars in “Harriet,” “Chaos Walking” and “Needle in a Timestack.”

Nicole Ari Parker—Actress Nicole Ari Parker has torn up the small screen this year. Her scheming and ruthless role as Giselle on “Empire” has made the nighttime soap opera even hotter. Parker has also appeared on the television series “The Romanoffs” and “I’m Dying Up Here.” However, the Baltimore native has not strayed too far from the big screen, starring in the movie, “How it Ends.” Soon, Parker will appear in the comedy, “HeadShop.”

Yara Shahidi—Just like Corinne Foxx, it is hard to fathom the fact that actress Yara Shahidi is a grown woman. We have watched her come of age on “Black-ish.” Now we are witnessing her become a woman on “Grown-ish.” In the meantime, Shahidi has proven that she is more than just talent. She also has a conscious, speaking out on many social and political issues of the day. In 2018, Shahidi appeared in Drake’s “Nice for What” video as well as voicing the character Brenda in “Smallfoot.”

Ava Duvernay—Filmmaker Ava Duvernay keeps winning in Hollywood. This year, Duvernay, scored a $100 million studio deal with Warner Bros. Pictures. In 2018, Duvernay directed “A Wrinkle in Time” and the video for Jay-Z’s “Family Feud.” She is filming a Netflix miniseries called “Central Park Five” and will direct the DC Comics movie “The New Gods.” The filmmaker continues to show how diverse her talents are with plans for a TV movie (“Battle of Versailles”) based on the 1973 Palace of Versailles fashion show, which pitted Yves Saint Laurent and Pierre Cardin against Oscar de la Renta and other American fashion newcomers.

Viola Davis—Academy Award winning actress Viola Davis only released one movie this year. But what a movie it was. “Widows” is one of the rare suspense films to come out of Hollywood recently that will totally knock audiences out of their socks and keep them guessing.  She kept up her presence on television with of course, “How to Get Away With Murder.” She will also star in a film about abolitionist, Harriet Tubman.

Beyoncé—Houston native Beyoncé could make Regal’s list of most beautiful women every year. But 2018 will go down in history because fans finally got a joint album from her and husband, Jay-Z. The Carters, as they are collectively called, dropped their long anticipated album “Everything is Love” and their fans went apes**t.  The couple dropped the album while performing on their “On the Run II Tour.” In 2019, Queen B will return to acting, voicing the character Nala in “The Lion King.”

Tichina Arnold—Actress Tichina Arnold is back on the small screen and killing it as usual. But be honest, you hoped that the next time Arnold hit the sitcom world it would be on a reboot of “Martin?” Seeing Pam go toe-to-toe with Martin is still a possibility. However, seeing Arnold go toe-to-toe with Cedric the Entertainer in “The Neighborhood” is not a bad consolation prize. Next year will be even busier with roles lined up in four films.

H.E.R.—If people exclude R&B singer H.E.R. from their list of the most beautiful women in Hollywood, no one should take offense. Not because she is not extremely talented and beautiful. But, the enigmatic and secretive singer rarely even shows her face, even on her album covers. But she singlehandedly can make sure the British female R&B invasion is not a complete European takeover. She released two E.P.’s in 2018 (“I Used to Know Her: The Prelude” and “I Used to Know Her: Part II”). She also appeared on Ella Mai’s debut album this year.

Claudia Jordan—Multimedia personality Claudia Jordan has enjoyed the media spotlight since her teenage years as Miss Rhode Island Teen USA in 1990. She followed that up with Miss Rhode Island USA in 1997. Since then, Jordan has appeared on television shows like “The Price is Right,” “Celebrity Apprentice” and “The Real Housewives of Atlanta.” Currently, she serves as a radio co-host of “The Morning Rush” with Rudy Rush.

Angela Bassett—Like Beyoncé, actress Angela Bassett could make Regal’s list of most beautiful women every year. But Bassett has really shone in 2018. No one says that she does not shine every year. But 2018 has seen her dominate the big and small screen. Bassett has done her thing on the small screen in “9-1-1.” And she has done her thing with big budget films like “Bumblebee,” “Mission Impossible—Fallout” and “Black Panther.”

SZA—Haters can say what they want about how R&B has fallen off. However, they must be talking about male R&B stars because the sisters have been holding it down over the last couple of years. If R&B fans did not know who SZA was in 2017 with her album “CTRL,” they sure do after she appeared on the “Black Panther Soundtrack.” Being on Top Dawg Entertainment with the likes of rappers Kendrick Lamar and ScHoolboy Q means SZA has plenty of opportunities to shine.