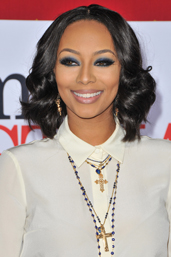 It has become an annual ritual at RegalMag.com to honor the most beautiful Black ladies in Hollywood.

If others do not celebrate Black women enough, then Black men should.

While beauty is by no means limited to Hollywood or the public eye, RegalMag.com would like to celebrate the 16 most beautiful women in Hollywood and beyond for the year 2016.

A second detail is that 2016 has to represent a significant year in their career.

Teyana Taylor—Teyana Taylor pissed us off at RegalMag.com with her performance as the ghetto fabulous Sabrina in “Madea’s Big Happy Family.”  It is hard to get the name Byron out of a person’s head after hearing her scream it so often.  Despite that, Taylor is a bad woman on that big screen and extremely beautiful.  Throughout her career she has appeared in movies like “Stomp the Yard 2: Homecoming” and videos by rappers like Big Sean and Kanye West.  But acting is not her only calling card as her albums consistently climb the R&B charts.

Draya Michele—The year 2016 has been a coming out party for model, fashion designer and TV personality Draya Michele as an actress.  She starred as Holly in “The Perfect Match” opposite Terrence J.  In addition, Michele has three more movies (one TV movie) on her 2016 resume including “Bring Out the Lady,” “True to the Game” and “All In.”  Sorry fellas, she is currently engaged to NFL star Orlando Scandrick.

Leslie Jones—Forget the haters “Big Les” because the brothers at RegalMag.com have your back.  Jones had to deal with social media trolls hating on her all year but still managed to brightly shine her star throughout the entertainment industry.  In 2016, Jones appeared in “Ghostbusters,” “Masterminds” and “Sing.”  Furthermore, she continued to appear on “Saturday Night Live” and during 2016 Summer Olympics coverage.

Keri Hilson—Ms. Keri baby is beyond beautiful.  Her career went beautifully in 2016 as well.  Hilson was great as J.B. Smoove’s forbidden love interest in “Almost Christmas.”  If J.B. had a chance with Keri, maybe everyone else did too.  Sorry for the shade J.B.  Additionally, Hilson is scheduled to release her album “L.I.A.R.” on Dec. 30.  The Decatur, Ga. native has also completed a T.V. movie called “The 10th Date,’ which comes out in 2017.

Janelle Monae—Everyone with a pulse knew that this sister could sing and light up a stage.  But in 2016 she proved that she could light up a big screen as well.  Monae made head-turning performances in “Hidden Figures” and “Moonlight.”  Despite her bright future on the screen, her first gig is still electric.  She absolutely lit up the stage at the 2016 BET Awards with her tribute performance to her late friend, Prince.

Dawn-Lyen Gardner—“Queen Sugar” is one of the hottest new shows on television and Dawn-Lyen Gardner is one of the hottest new actresses on TV.  The Los Angles native began her career in commercials but eventually studied at Julliard, winning the Liz Smith Prize.  In 2016, Gardner also appeared in episodes of “Luke Cage,” “Unforgettable” and “I Love You…But I Lied.”  She will also appear soon in the film “The Dunning Man.”

Lynn Whitfield—Black don’t crack and Baton Rouge, La. native is still just as beautiful and accomplished as she was when she appeared in “The Josephine Baker Story.”  She was also still beautiful when she portrayed a crazed pyscho in “A Thin Line Between Love and Hate.”  Whitfield has worked steadily in Hollywood since 1981 but her role as Mae Greenleaf on “Greenleaf” might become her signature role.  She currently has two movie roles in post-production, “Espionage TV” and “Solace.”

Oprah Winfrey—People credit media mogul Tyler Perry for saving the Oprah Winfrey Network (OWN).  If Perry gave Winfrey a lifeline, Winfrey took that lifeline and gave life to more creative visions that have taken OWN to the next level.  Along with Perry’s shows, OWN now boasts popular shows like “Greenleaf” and “Queen Sugar.”  Haters should have never doubted Winfrey’s future as a network owner in the first place.

Kamala Harris—Kamala Harris made history during the 2016 election becoming the second Black woman to ever be elected to the United States Senate.  The Oakland native previously served as Deputy District Attorney in Alameda County, Calif., District Attorney in San Francisco and California Attorney General.  She is also a Howard University graduate and member of Alpha Kappa Alpha Sorority, Inc.

Merle Dandridge—Since 2003, actress Merle Dandridge has been working her way up the ladder of success by appearing in TV shows like “All My Children” and “Rosewood.”  However, with the success of “Greenleaf,” 2016 has marked the year of her “arrival” in Hollywood.  Dandridge was born in Okinawa, Japan to a Korean mother and an African-American father who was serving in the U.S. Air Force.  The TV star graduated from high school in Nebraska before receiving a full ride scholarship to Theatre Conservatory at Roosevelt University in Chicago.

Naomie Harris—Actress Naomie Harris is receiving Oscar buzz for her role as a drug-addicted single mother in the film “Moonlight.”  The London native also appeared in “Collateral Beauty” and “Our Kind of Traitor” in 2016.  Harris is perhaps best known as the first Black actress to play Miss Moneypenny in the “James Bond” series.  A fun fact is that she replaced Academy Award winning actress Lupita Nyong’o in the 2015 film “Southpaw.”

Beyoncé—In 2016, Miss Third Ward (aka Queen B) got all the ladies in formation even though many fellas still don’t know what that means.  She released her latest album, with an accompanying film, called “Lemonade.”  She paid tribute to the misunderstood Black Panther Party at Super Bowl 50 and she and her husband Jay-Z gave generously to the Black Lives Matter Movement.  The entertainment icon recently received nine 2017 Grammy Award nominations.

Michelle Obama—First Lady Michelle Obama, the people already miss you and you are still residing in the White House.  Grace, style and class epitomized your tenure and it will be sorely missed.  Thank you for your dedication fighting childhood obesity and being a great role model for Black girls around the globe.

Sierra McClain—The oldest daughter in “Tyler Perry’s Daddy’s Little Girls” is all grown up and is extremely beautiful and talented.  McClain currently stars as Nessa in “Empire,” replacing Rhonda (Kaitlin Doubleday) as Andre’s (Trai Byers) love interest.   The role in “Empire” shows her range as an actor and her talent as a singer.  With a resume that includes performances in “The Gospel,” it is no surprise that she is finally getting to shine for the masses.

Nicole Ari Parker—Somehow Nicole Ari Parker is slept on when it comes to the most beautiful women in the world but she is definitely that.  Parker has been holding it down since the “Soul Food” TV series, but 2016 has definitely been good to her.  She starred in the instant classic film “Almost Christmas.”  Furthermore, she has appeared in Fox’s “Rosewood” and will also appear in two upcoming TV series, “Model Woman” and “Time After Time.”  Last year, she co-hosted the talk show “The Boris and Nicole Show” with her husband Boris Kodjoe.

Joy Taylor—Up until 2016, Joy Taylor was probably known as just former NFL star Jason Taylor’s little sister.  My have things changed thanks to the hottest new sports show on the planet, “Undisputed” on FS1.  Somehow she is able to rein in Skip Bayless and Shannon Sharp as the moderator of that show.  Her background is in radio, though, spending many years at various stations after completing her Bachelor of Arts degree in Broadcast Communications from Barry University in 2009.