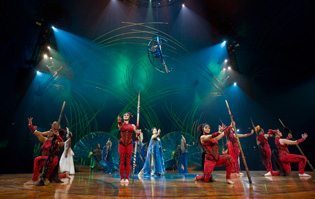 Go Against the Grain This Valentine’s Day

I cannot speak for women, but if I got the same gift every year for Valentine’s Day it would become ridiculously redundant.

Chocolates eventually take their toll on the scale and so do dinners at expensive restaurants.

Although most gifts have a shelf life or an expiration date, putting thought into your Valentine’s Day gift is what’s important and going against the grain will definitely earn you brownie points for thought and creativity.

Cirque Du Soleil’s latest production “Amaluna” debuted in Houston on Feb. 12 and it is the perfect Valentine’s Day gift for your lady, especially for the brother who suffers from that dreaded disease known as procrastination.

And unlike taking your lady to see “50 Shades of Grey,” even the brothers will enjoy Cirque Du Soleil’s “Amaluna.”

Cirque Du Soleil is obviously known worldwide for its display of acrobatics, beautiful visual imagery and talented and athletic performers.

Despite the aesthetics and hard to believe acrobatics, Cirque Du Soleil productions also have a storyline despite very little dialogue or narration.

“Amaluna” is a love story that takes place in the magical world of Amaluna.

The Cirque Du Soleil production begins with the pulsating beat of bongo drums and the chirping of exotic birds.

The female protagonist Miranda is royalty, the daughter of sorceress Prospera, and she is heavily protected from the many male suitors trying to win her heart.

When a group of sailors, led by a comical pirate, wash up on the shores of Amaluna, the royal beauty immediately fascinates one gent, as she is fascinated with him.

However, every attempt he makes to get close to her heart and close to her physically is met with rebuke and refusal by those around her.

The love between the two is obvious, but can their love persevere despite the attempts to keep them apart?

According to the Houston Chronicle, “You’ll recognize the plot as Shakespeare’s ‘The Tempest’—though with a gender change from Prospero to Prospera, for the ingénue’s protective parent.”

The love story and the determination of Miranda and the sailor is something that many ladies will be enamored with, while the acrobatics and the talent of the cast is something both men and women will love equally.

The juggling/fire segment of the production is absolutely fascinating.

The cast also does a great job interacting with the crowd and the pirate and his female admirer do a good job of interjecting some comedic moments.

However, Cirque Du Soleil’s “Amaluna” did suffer from a few miscues from cast members, but that is understandable and forgivable for opening night.

Mistakes notwithstanding, if any man, especially in Houston, made the unforgivable mistake of forgetting that Valentine’s Day is tomorrow, buying tickets to Cirque Du Soleil’s “Amaluna” could save you from spending the weekend on that uncomfortable couch.

Furthermore, your lady will think the world of you for thinking outside the box and not sticking to the Valentine’s Day status quo.

And trust me, she’ll never know that you bought the tickets at the last minute.  “Amaluna” runs through March 22 at Sam Houston Race Park in Houston.