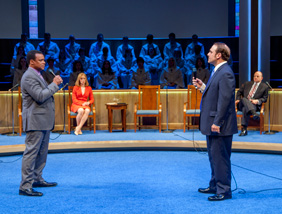 
What if Hell Does Not Exist?

In 2011, Christian preacher Rob Bell sent shockwaves through the community of faith and angered many believers by stating that Hell did not exist.

The new stage play, “The Christians” playing at Houston’s Alley Theatre tackles that touchy subject and the consequences of such statements for the church and society at large.

In “The Christians,” pastor Paul (Richard Thieriot) has an “epiphany” after attending a church convention in Orlando, Fla.

While eating his free continental breakfast at the hotel, Paul is moved by a speech by a colleague.

The colleague spoke about a teenage boy in a foreign country who did not have a relationship with Jesus Christ.

During a massive fire, the heroic boy ran into a burning building to save younger children from a certain death.

However, while saving the lives of others, he lost his life, experiencing an excruciating death at the hands of the brutal flames.

The colleague spoke about how upset he was that he could not introduce the young man to salvation through Christ, which would have guaranteed him everlasting life in Heaven.

Because the boy did not accept Christ as Lord and Savior, his eternal home would be Hell, permanently separated from the love of God.

Unable to accept the fate of the young teenage boy, Paul spoke to God.

While back at his home church, he claims that God told him that Hell and Satan did not exist, and that when Jesus Christ died on the cross and rose on the third day, his sacrifice meant eternal life for everyone, not just believers.

The new philosophy of the congregation leads to friction, confusion and fracturing.

“The Christians” tackles poignant questions that many non-believers, and even some believers, have such as is only one religion correct in its beliefs, and is Jesus Christ the only way to get to Heaven?

Some don’t believe that God is so rigid with his views of Christianity being the only truth, while others believe that God cannot have a different set of rules for each individual so there has to be one set standard to gain everlasting life.

The play “The Christians” should be applauded for not being scared to offend with its willingness to discuss issues that many people think about but do not openly talk about.

Thieriot is good in his role as Paul.

But Shawn Hamilton (“All the Way”) is very good as the strict Bible-believing associate pastor Joshua.

Her questions about Paul’s new beliefs are just as poignant as Paul’s questions to those who believe that the Bible is the inerrant word of God.

If there is no Hell, is Adolf Hitler in Heaven?

And if someone murdered her children, would he/she be in Heaven with her and her children like one big happy family?

“The Christians” is a good and deep play that all believers and non-believers alike need to see.

However, technically some things should have been done much differently.

The actors should not have had to carry microphones with long chords with them every time they had a line.

Furthermore, the script should not have had actors describe what their co-stars were doing.

Instead, the audience should have just seen that actor or actress doing their thing.

Nevertheless, the subject matter behind “The Christians” will definitely send shockwaves throughout society.

The play is currently at the Alley Theatre in Houston until May 15.