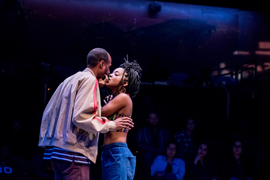 Playwright and lead performer NSangou Njikam as Gordon and Kara Young as Sweet Tea in the world premiere of “Syncing Ink” at the Alley Theatre in Houston (Photo Credit: Christopher Diaz).

“I might have failed to mention that the s*** was creative, but once the man got you well he altered your native, told her if she got an energetic gimmick that she could make money, and she did it like a dummy, now I see her in commercials, she’s universal, she used to only swing with the inner-city circle.”

The lyrics from Common’s iconic rap song “I Used to Love H.E.R.” will always be relevant because it speaks to the true essence of hip-hop and its evolution, for better or worse.

Actor/playwright NSangou Njikam’s new play “Syncing Ink” at Houston’s Alley Theatre encapsulates all that is great about REAL hip-hop while appropriately criticizing the new generation of mumble rappers who often face heat from their hip-hop forefathers for not appreciating the craft and the platform of a true emcee.

If true hip-hop heads do not appreciate the creativity and historical lessons from the Tony Award winning play “Hamilton,” then they will definitely appreciate a play that is hip-hop to its core with no apologies for its rawness or blackness.

Gordon (Njikam) is a typical nerdy suburban Black kid who has to find a way to fit in at a real and authentic all Black high school.

His senior year should be sweet, but trying to figure out who he is and how he fits in with his more fly classmates makes his experience sour.

His A.P. English teacher Mr. Wright (Adesola A. Osakalumi) finds a way to make literature and poetry relevant to their lives by introducing them to haikus, while allowing them to use the poetry to fit into their style of creating rap lyrics.

Every day is like a rap battle in a cypher (a circle where rap artists freestyle rap against each other), but while Gordon loves hip-hop, his love is not transferred into him creating his own voice.

However, with the encouragement of a female admirer named Sweet Tea, Queen T or Feminini-T depending on the day of the week, he finds his voice and lives up to his full potential and the true meaning of an emcee.

“Syncing Ink” is one of the most creative plays to come out in a long time.

Do not be surprised to see it soon on Broadway because it is just that remarkable.

The cast was selected perfectly and the songs that provide the soundtrack will be music to any true hip-hop head’s ears.

Songs like “Can I Kick It?” by A Tribe Called Quest, “Rapper’s Delight” by The Sugarhill Gang and “I’ll Be There For You/Your All I Need to Get By” by Method Man and Mary J. Blige are combined with original rhymes and live freestyles to give “Syncing Ink” that true rap flavor.

The entire cast of “Syncing Ink” shines in their multiple roles but Kara Young (Sweet Tea) is the star of stars.

Her role as the feminist rapper in a male dominating genre is inspiring.

Accept for a few botched lines, the cast put on a flawless performance.

Unfortunately, some of the explicit language might be too offensive for younger or much older audience members.

However, that realness is something that is missing from the current mumble rap generation.