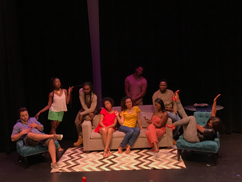 Shout out to legendary urban playwrights like Tyler Perry, David E. Talbert and Je’Caryous Johnson, however there is a new sheriff coming to town.

And if the residents of the town have a problem with a lady boss bringing the lady’s perspective to the urban stage play scene, then playwright Renee Rivon will solve that problem with her great talent, comedic timing and her eye for acting talent.

The title “Games Women Play” is something that will make men want to check it out.

However, by the end of the play, men will know that they play as many games as women and that can sometimes be detrimental to the health of all relationships.

In the play “Games Women Play,” Milan Jackson (Ashley Forrestier) is not done with love, but she is done being victimized by unfaithful men.

She thought she had the perfect husband in Jones.

However, when Jones has a long affair with his mistress, Milan refuses to be cheated on again.

Even Jones’ mistress plays games with him and Milan when she cannot get her way in her adulterous relationship with Jones.

Milan, a television talk show producer, enters a “safe” relationship with Marvin, a wealthy businessman.  But the flame and excitement usually associated with passionate relationships are absent in their relationship.

When Marvin proposes to Milan on live television, she hesitates before agreeing to marriage only if Marvin signs a prenuptial agreement.

The prenuptial agreement would allow Milan to be financially compensated if Marvin ever commits adultery during their marriage.

Unfortunately, Milan is not the only lady playing games on the talk show set.

The talk show host Miss Cee Cee has a crush on Peter (Aaron Buzzanga), the only White boy on the staff.

But instead of being upfront and asking Peter out, Miss Cee Cee seeks to destroy his life as a way of showing her affection for him.

Fellas, does that make sense?

Of course not, but those are the games women play.

“Games Women Play” is a breath of fresh air in its honesty of depicting the way some women act when pursuing love and relationships.

Rivon’s genius is that she does not just preach from the pulpit and cast blame on only men in relationships.

The Houston playwright looks at relationships honestly and singles out men when men are in the wrong, while also singling out the ladies when she feels that they are in the wrong.

“Games Women Play,” along with all of her other plays force men and women to look at their relationship mistakes and not just point the finger selfishly at the opposite sex.

While Milan is the lead character, the character that shines the most is Milan’s socially awkward and scripture quoting cousin Tanglea.

Tanglea is the one woman who refuses to play games with the men that she is interested in.

Unfortunately for her, it is hard to seduce a man without combing her hair or changing out of her nightgown.

Tanglea’s most stable relationship is with Milan’s pillow, which gets more action than the men in “Games Women Play.”

Unfortunately for “Games Women Play,” the small venue made it distracting at times for attendees with a late arriving crowd.

But it is only a matter of time before Rivon is at bigger venues.

And it is a guarantee that one day her name will be mentioned with all of the stalwarts of the urban play scene like Perry, Talbert and Johnson.