Play Review: All Can Relate to ‘The Rules of Romance’ 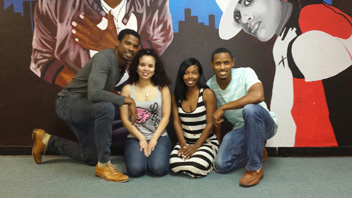 Be Careful What You Wish For

Have you ever prayed to God so adamantly about something that it seems your prayer got answered to the tee?

The mate that you envisioned for yourself physically is exactly what God gave you.

However, you soon realize that every answered prayer is not a blessing and all blessings do not come in the exact package that you imagined.

Most men and women can relate to that predicament, and everyone will relate to Dee Dee (Ashley Rene’ Forrestier) in Renee Rivon’s “The Rules of Romance,” which debuted in Houston on April 18.

The only thing that separates Dee Dee from men, however, is that she is so desperate to get married she believes every man she meets is “the one.”

It does not matter if they are broke, brain dead or one of the worst men ever born, Dee Dee wants them in her life from day one.

In “The Rules of Romance,” the protagonist has a way of looking at love through “romance goggles,” seeing only what she wants to see.

Dee Dee places the pictures of all her ex-boyfriends on a wall of shame at her house so that she is reminded not to make the same mistakes again in dating.

Nevertheless, she finds herself crying the same heartbroken tears after her relationships meet their demise, which is usually only in a few weeks.

She dates the affluent real estate mogul, the player that has no intentions of settling down and the muscle bound model, but ignores the ideal man whom she sees on a daily basis.

To make matters worse, Dee Dee is supposed to be a romance novelist, but cannot figure out the most elementary aspects of a real relationship.

Her warped view of love is not only threatening her personal life but her professional life as well.

“The Rules of Romance” is another superb play for Rivon.

While her other productions have featured some of Hollywood’s most popular performers from Vivica A. Fox to T-Boz and Brian McKnight, the playwright also has an eye for up-and-coming talent.

The intimate setting at the Frenetic Theater in Houston allowed the audience at “The Rules of Romance” to develop a real and personal connection with the talent.

Forrestier was great and sympathetic.  Rivon even allowed her to showcase her singing skills at the beginning of “The Rules of Romance.”

Furthermore, Dez Abrams who plays Lewis and Cameron Fuller who portrays Justin did a marvelous job with their characters too.

Although fellas tend to shy away from entertainment based on relationships, the characters in “The Rules of Romance” are spot on.

Men will know people like all of the female and male characters in the play from the bug-a-boo to the baller.

Even the emcee, Netra “Ms. Already” Babin was superb with her comedy.

Babin is 36 years old, unmarried and without a child and was able to channel the frustration that Dee Dee feels from family members trying to rush her into marriage and motherhood.  But Babin, Dee Dee and all other unmarried women and men must follow the rules of romance, be open minded, allow God to choose your spouse and do not get caught up only in the superficial.