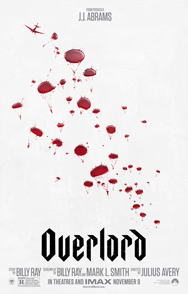 Nazis, Zombies and the Good Guys

The aforementioned adjectives all describe the uniquely different and genre-hybrid (war film and zombie film) of a movie “Overlord,” making it strangely satisfying despite its peculiarities.

In “Overlord,” actor Bokeem Woodbine leads an Army unit during World War II in 1944 into enemy territory within the country of France.

Nazi Germany has taken over France, and it’s the United States Army’s job to find the drop zone in order to take down a command tower filled with Nazis, so that other American soldiers can come in and secure the country from German occupation.

The Nazis have placed the command tower inside a large French church.

Why would the Nazis conduct their evil operation from within a sacred house of worship?

Well, as the Army commander Rensin (Woodbine) said, it is because the Germans have no respect for what is good on this planet.

Although the mission in “Overlord” is clear, nothing in war is that easily accomplished.

On the way to the drop zone in France, the Germans shoot down Rensin’s crew, with all soldiers forced to jump from their enflamed airplane.

Rensin has made it known to his soldiers that if they do not receive orders directly from him, then they should listen to the orders of Ford (Wyatt Russell) who is dedicated to fulfilling the mission of knocking down the church tower by any means necessary.

Unfortunately, after the airplane explosion and desperate escape, the Army unit is totally depleted and they are severely outnumbered by German soldiers who are located everywhere that the eye can see.

While the soldiers are loyal and dedicated to fulfilling America’s military mission, most of them are not the best soldiers to fulfill the mission.

Ford is a no-nonsense soldier who does not have the patience to deal with some of his subordinates.

He grows frustrated with Chase who only is concerned with taking pictures of the action from the frontlines because of his journalistic pursuits.

Boyce is a good soldier, but has only been in the Army for three months.

Luckily for him and his crew, he knows French because of his Haitian grandmother and that might come in handy while conducting their mission in France.

And Tibbet is the most talkative son-of-a-gun on planet Earth.

While silence is golden when trying to go undetected behind enemy lines in a war zone, Tibbet talks more than a talking head from political talk radio.

Not only does Tibbet talk a mile a minute, he is extremely and unnecessarily loud.

His mouth might put everyone in danger in “Overlord.”

Outnumbered and probably left for dead, the few American soldiers left on the ground have a monumental task because hundreds, if not thousands, of German soldiers remain between them and the church tower.

And unfortunately, the remaining soldiers only have the weapons on them that survived the plane crash with them.

In a fortuitous moment that at first looks like danger for the American soldiers, the remaining crew meets Chloe (Mathilde Ollivier) who is in the woods, scavenging for things of value from the bodies of dead soldiers.

Boyce is able to communicate with Chloe, and the French woman is able to give the soldiers refuge for the night.

Despite living in a war zone, Paul only wants to play baseball with his new American soldier friends because he thinks all Americans play baseball.

And Paul wants to do whatever Tibbet does even though Tibbet has no patience with the kid.

Perhaps Paul is looking for a father figure after German invaders kill his parents.

However, something is just not right with the description of Chloe’s aunt being gravely ill.

Her aunt makes the weirdest noises ever.

And when Boyce goes to investigate, he sees a scary creature that hardly resembles a human being.

Knowing that they only have a certain amount of time to accomplish their mission before other American soldiers storm France, Boyce sneaks into the church and witnesses the German government conducting experiments on captured foreigners and prisoners of war.

The Nazis are injecting living people and the dead with a serum that turns them into indestructible zombies who wreak havoc on those that are merely human.

So in order to take down the church tower, the few American soldiers remaining have to battle thousands of human Nazi soldiers to get into the church, and then fight off the same amount of dead zombies inside the church who want to devour any human in sight.

Despite its weirdness, “Overlord” wins because it does not follow the usual and old Hollywood trend.

It does follow the recent Hollywood trend of blending movie genres into a hybrid-like combination.

The first half of “Overlord” has something for movie buffs that love war and historical dramas.

And the second half of “Overlord” has something for movie buffs that like zombie, apocalyptic movies.

But the performances of some of the actors stand out as well.

Adepo provides depth to the story in “Overlord.”

Stereotypically, soldiers are seen as warriors willing to kill for love of country, but Boyce shows the reluctance of someone forced into a situation that he does not want to be in.

Sure, he loves his country and he joined the military when required to during World War II, but shooting someone and becoming that savage sometimes necessary to survive war does not come naturally for him.

As Tibbet correctly told Boyce, he is not built for war.

Tibbet himself brings “Overlord” some much-needed comedy, which is extremely rare in a war/zombie film.

“Overlord” is worth checking out, but be aware that several adjectives describe the film.