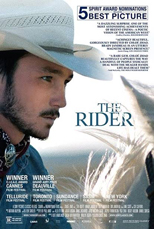 Sometimes, the trailer to a movie greatly deceives the public.

Often, the trailer does not do the film any justice because the film exceeds the expectations generated by the preview.

On the contrary, a trailer can outshine the movie in such a way that the film should have just ended when the trailer ended.

Unfortunately, “The Rider” has an excellent trailer, but is only an average feature length movie, not because the film does not have a dope concept, but because the action needed to make a good film never materializes.

In “The Rider,” all Brady knows in life revolves around the rodeo and the lifestyle of a cowboy.

While many might not relate to the rustic life of rural America, many people can relate to someone who spends their entire life striving for success in one field, and then has their dreams viciously snatched away in a wicked heartbeat.

Hip-hop heads saw it when future rap star The D.O.C. lost his voice in an automobile accident.

Basketball fans saw it when Loyola Marymount University basketball star Hank Gathers shook on the court and died of heart failure while his mother screamed in anguish next to her dying son.

And America as a whole saw it as former Attorney General Bobby Kennedy had his presidential dreams, and the dreams of America’s lower and forgotten class, snatched away by an assassin’s bullet at the Ambassador Hotel in Los Angeles in 1968.

Brady’s (Brady Jandreau) dream of becoming the best cowboy and rodeo star on the planet gets placed on hold when his horse throws him from the saddle, severely injuring his head.

His head sustains such devastating injuries that he has to get a metal plate inserted into his skull and staples injected into his head to fix the damages.

Not only does Brady have to deal with the physical trauma to his head, he has to deal with the seizures that occur as a result and the effects that his damaged brain has on the rest of his body.

And like many people who have dreams deferred and destroyed, Brady’s dreams of rodeo glory do not exist in his mind just for personal glory.

After his mother died and his father, Wayne Blackburn (Tim Jandreau) began spending much of his time gambling and drinking, Brady needs the money provided by rodeo wins to help support his family; especially his special needs sister Lilly Blackburn (Lilly Jandreau).

“The Rider” slowly depicts Brady’s struggle with adjusting to life without the rodeo, and without any other discernible skill or talent, which includes nightmares, alcohol and marijuana.

The question in “The Rider” is can Brady learn to survive without his passion in life, while still finding purpose in life and happiness?

From a filmmaking process, “The Rider” deserves all of the accolades and recognition that the movie has received on the festival circuit.

From the way writer and director Chloe Zhao captures the heartland of America from the rough mountains to the prairie farmland; rural America has rarely looked better on screen.

The pace and theme of the movie “The Rider” correlates with “Moonlight” to a degree.

Although “Moonlight” deals with a young boy coming of age and trying to find his place in life and “The Rider” deals with an adult, both films deal with identity and figuring out one’s place in the world.

Furthermore, the movie adaptation of “Friday Night Lights” deals with the search for identity when a person’s dreams are snatched right from under a person’s feet.

In “Friday Night Lights,” Boobie Miles (Derek Luke) had Heisman Trophy potential as a running back at Permian High School in Odessa, Texas.

But devastating knee injuries ended his plan “A” in life and sent him on a tailspin because he had not cultivated or prepared a backup plan for life.

And Brady, unfortunately, finds himself at a similar crossroad in life.

So many people can relate to Brady’s plight and it has been told on film many times.

However, the underdog story often resonates with everyday people despite better competition from films with a similar message.

Additionally, western and rural life had seemed to take a back seat in Hollywood in recent decades, but is seeing somewhat of a renaissance in the last couple of years with films like “Hostiles” and “The Magnificent Seven.”

Hollywood is luckily taking advantage of the fact that people from all walks of life want to see something that they can relate to on the big screen, and cowboys are no different than any other demographic.

Despite the serious nature of the dream-deferred narrative, “The Rider” injects some much-needed humor thanks to Lilly.

She amusingly cuts up the bra her dad buys her because she does not like wearing bras, despite desperately needing one as a developing teenager.

Lilly also playfully places stickers all over Brady’s body when he is asleep, not even warning him when he goes to answer the door, adorned with stars over his body and face.

Unfortunately, the positives do not overshadow the negatives in “The Rider.”

Although critics on the film festival circuit love the film’s cinematic beauty and story, the story does not contain enough drama or action to satisfy the average moviegoer.

The best scenes of the film deal with Brady taming wild horses and turning them into true friends and companions.

He has a magical way with those creatures.

Nonetheless, the magic of “The Rider” ends with the horses and their trainer and does not transfer past the dull and mundane everyday life of an ex-cowboy.

In reality, the magic ends with the trailer and never lasts for the entire movie.