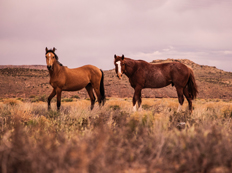 Never have horses gotten so much screen time in Hollywood since the great, “Mister Ed.”

But in “The Mustang,” animals are shown as the loving and rehabilitating creatures that many are.

And love is something that Roman Coleman (Matthias Schoenaerts, “The Drop”) desperately needs as he battles the loneliness and treachery of prison life while struggling with a violent temper in “The Mustang.”

In “The Mustang,” Roman has already spent 12 years behind the fences.

He has basically orphaned his daughter who wants to be emancipated so that she can move to Atlanta with her auto mechanic boyfriend.

She is a teenager and pregnant with her first child.

And his failure to work with others makes it virtually impossible for him to find work or programs within the prison system to make his incarceration more productive.

Roman has to find a prison work program so that he can return to general population.

But when Roman turns down every other assignment that the psychologist (Connie Britton, “Professor Marston and the Wonder Women”) offers, she places him in a program that rehabilitates mustangs and gets them ready for auction.

Most of the newly trained mustangs will find work within police departments and on border patrols.

Roberto (Noel Gugliemi), one of Roman’s prison-mates in the mustang rehabilitation program jokingly tells his horse that if he sees his cousin at the border, run the other way in order to let him into America.

Therefore, it is imperative that the inmates like Roman fully break the horses in so that the auction can produce money to keep the prison horse program functioning.

If the horses cannot be broken, they will be euthanized because too much overpopulation makes it impossible for them to get released into the wild.

That large number of wild horses makes it difficult when it comes to human population growth and expansion into the Wild West.

Therefore, the horses that serve a purpose will survive.

While the horses that do not serve a purpose, have to be put down.

Although Roman still struggles with his temperament, the horses eventually bring a calming presence to his life, forcing him to loosen up a bit.

Unfortunately, initially Roman is placed in charge of shoveling horse manure before he is trusted with training the beautiful and powerful creatures.

When Roman finally gets to interact with the horses, his apprehension and nervousness show.

But Henry eventually sees that Roman has a knack for connecting with the mustangs at the prison complex.

Although Henry is African-American and Roman is White, which usually forbids friendships from developing behind the walls, the more experienced Henry takes Roman under his wings.

Even though Henry and Roman get along well that does not mean that the rest of the prison is as progressive as the two new friends.

That reality might make it harder for Roman to maintain his new found tranquility in “The Mustang.”

Although “The Mustang” is slow and subdued, that gradual pace is appropriate considering that the film takes place behind prison walls.

Life in prison is slow.

Life in prison is tedious.

Life in prison is boring at times.

And life in prison can be difficult.

But filmmaker Laure de Clermont-Tonnerre does well capturing the monotony of prison life.

The way the West is captured visually, with the majesty of the horses on center stage, makes “The Mustang” a cool film.

Not a great film.

But, “The Mustang” is a cool film.

What makes “The Mustang” cool is Schoenaerts’ performance.

His character Roman has a quiet intensity that obviously only erupts when he loses his temper.

At one time, Roman even gets into a fistfight with a horse.

Obviously, only a human being with a short fuse would ever attempt to fight a horse because the horse will probably win the fight every time.

Nonetheless, Roman takes on that challenge.

The results of the fight do not make Roman a winner in the eyes of those running the horse program, unfortunately.

Like Lincoln Burrows in “Prison Break,” Roman Coleman in “The Mustang” does not always raise his voice when upset.

However, the look on his face has enough intensity at times to speak for him.

After all, most communication is non-verbal anyway.

But to see Roman’s transformation in “The Mustang” is really what prison is supposed to be about, which is punishment and then rehabilitation of the inmate.

On a lesser note, Mitchell shines as well in the film.

The New Orleans native is slowly carving out a niche in Hollywood, which will make him one of the up-and-coming stars in African-American cinema.

Mitchell should have received an Academy Award nomination for his masterful portrayal of rapper Eazy-E of N.W.A in “Straight Outta Compton.”

Furthermore, Mitchell should have received award love for his portrayal as a World War II veteran in the 2017 Netflix film, “Mudbound” starring Mary J. Blige.

Nevertheless, if Mitchell continues to show his acting range like he does in “The Mustang,” props from his peers in Hollywood will eventually come for the young thespian.

However, it would have been great to see Britton in more scenes in “The Mustang.”

Real fans of the small screen and the big screen know how brilliant an actress Britton is.

Therefore, it is always good to see her more, rather than less on the screen.

However, when she is on screen in “The Mustang” she takes no prisoners, even though her character is surrounded by violent male prisoners.

But the true focus of “The Mustang” is the magnificent horses roaming the prairie and the prison yard.

The horses make the film move, giving it the horse power that it possesses.