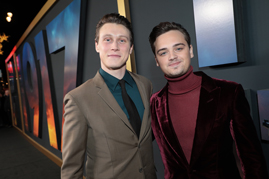 Family members and friends who have lost loved-ones to war never seem to get over their loss.

I am pretty sure his relatives still reminisce about his life if my parents still do.

But imagine having two family members in the same war.

Imagine one brother having to put his life in harms way to save his brother from an almost certain demise.

Imagine that it is “1917” and that sad reality hit you in the face.

Help save your brother’s life by putting your life in danger.

What would you do?

Would you save yourself only by staying out of harm’s way?

Or would you put yourself in the predicament of getting you and your brother killed?

Ironically, “1917” opens up so peacefully and serene that one would not know a war was raging if the men in the opening scene did not have on military uniforms.

Blake and his comrades lay across an open field getting some “shuteye,” while others look for food.

He is awakened from his slumber when he learns of a mission that his superiors want him to handle.

Thinking the mission is minor; he brings his buddy Schofield (George McKay) along for the meeting.

Unfortunately, the meeting is anything but minor.

Blake’s bosses have gotten word that his brother Lieutenant Blake’s (Richard Madden, “Rocketman”) military squadron has planned an attack on their German enemies who have since retreated from land that they once occupied.

Although it seems like the Germans have given up on their mission, their retreat is a ploy to lull the soldiers into a false sense of accomplishment before decimating them by surprise.

All communication between the groups has ceased.

Therefore, the military needs men to travel on foot to warn 1,600 troops verbally and in person that they are about to fall right into a deadly trap set by the Germans.

Because Blake is keen with a map, and the fact that he has something personal at stake if the 1,600 fall into the German trap, he is chosen to reach his compatriots before they make a fatal mistake.

Originally thinking that his superiors have called him in to complete some minor and mundane task, he unwittingly nominates Schofield to go with him on this treacherous journey, which might be a death trap.

Other soldiers begin spraying Blake and Schofield with holy water when they learn the devilish details of their dilemma.

Although holy water has been applied, in “1917” Blake and Schofield go through what looks like holy hell as they try to complete their missions, which include making it past barbwire fences, mountains of deceased military men, mice eating those men and missiles coming from the enemy.

But when it comes to saving the life of a family member, not to mention the lives of 1,600 others from their homeland, many will go through hell or high water just to achieve heavenly results.

“1917” is such a great film because it is a microcosm of all wars and all battles from the perspective of all countries.


Although “1917” focuses on one particular military mission from an English point-of-view it captures the treachery and anxiety of all wars.

Soldiers are often portrayed as valiant and brave heroes, which they obviously are because without them civilians could not enjoy the freedoms that they enjoy.

But heroism notwithstanding, soldiers are just men and women with the same fears and trepidation of every other human being.

Blake symbolizes that fear and trepidation perfectly in “1917.”

However, he also symbolizes that bravery that comes out when someone is in a do or die situation.

As a result of the complexity of Blake’s character, “1917” shines as a war film.

He is nether one thing or the other.

Blake is not just brave and not just scared when contemplating his predicament during the war.

In essence, Blake is human with a wide range of emotions throughout “1917.”

The movie “1917” continues a trend of Chapman playing British soldiers like his role in “The King” on Netflix.

While “The King” does not capture the throne, Chapman steps up to the throne to reclaim his royalty in “1917.”

Unfortunately, “1917” takes a little bit of time to get going.

However, once the film gets going it does not stop until the very end.

Moviegoers will truly get to feel what soldiers endure during war, which should increase people’s appreciation for these heroes.

And while Chapman and McKay get ample time to shine in “1917,” it would have been great for Marsden and Benedict Cumberbatch to receive more screen time in this epic war flick.

But slighting some well-known actors and an initial slow pace, cannot stop the juggernaut known as “1917” because moviegoers will be able to put themselves in the shoes of Blake, Schofield and their family and friends.

While most probably do not know of someone who made the ultimate sacrifice for their country, many know about worrying about a loved-one fighting for their freedom overseas.

Not knowing if your loved-one will make it home from war is excruciating and nerve wrecking.

And that is what “1917” represents, a nerve wrecking two hours in which moviegoers get a true appreciation for true heroes.