Film Review: ‘Thank You For Your Service’ Painfully Powerful 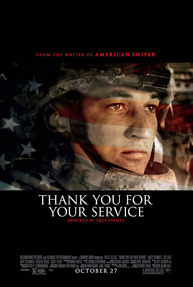 Yes, Americans often thank soldiers for their service but how does that really help the soldiers?

Standing for the national anthem does not replace a lost limb.

Standing ovations at sporting events do not make up for the fact that many can no longer stand on their own.

And the government that asked them to sacrifice life and limb often delays getting them the physical and mental health help the soldiers need when they arrive back on American soil.

The new film “Thank You For Your Service” starring rising star Miles Teller brings the harsh reality of life after war right into the face of other Americans and begs the question, is your gratitude for the sacrifices of soldiers merely empty rhetoric or do you put those words into action by actually helping suffering American veterans?

“Thank You For Your Service” really resonates because many Americans know a veteran who survived a war physically, but never survived the war mentally and unfortunately never got the help they needed.

For my family my uncle Richard Griffin, a Vietnam War veteran, experienced everything the soldiers in “Thank You For Your Service” experienced after coming home from the battlefield.

My uncle experienced the sleepless nights, waking up screaming in terror, begging the enemy not to shoot.

Although he went on to have a productive life with two beautiful children and a loving wife, the mental scars suffered on the battlefield never healed, and unfortunately it seems no one outside of our family cared.

In “Thank You For Your Service,” Adam Schumann (Teller, “Only The Brave”), Solo (Beulah Koale) and Will (Joe Cole) have all finished their tour of duty in Iraq in 2007.

Unfortunately, nothing is the same in their hometown of Topeka, Kan. when they return, and readjusting to civilian life can become a life and death situation for the trio.

Schumann’s wife, daughter and newborn son have had to move out of their dream house into something more affordable since his deployment.

The fact that Schumann has been away from his children for so long is evident in the fact that he hardly mentions his newborn son.

Will is returning home to plan his wedding.

However, when he gets back home he finds an empty house, no electricity and no fiancée.

Solo does not want to stay home for very long though.

Although he has a loving wife, he misses his “brothers” on the battlefield.

Unfortunately, the trauma of war has adversely affected his mental health so badly that the military might not allow him to reenlist.

Surviving the harsh reality of returning to civilian life after war depends on whether the trio can get the help they need before it is too late.

For the rising star Teller, “Thank You For Your Service” represents the young thespian’s most emotional role.

Likewise, the same can be said about his co-stars Koale and Cole.

The actors play their roles with such passion that moviegoers will have sympathy for their plight and the plight of every soldier that comes home from war.

Furthermore, the film shows the pain experienced by their loved-ones who on one hand are so thrilled to have their family member home, but on the other hand have to come to the realization that the person that left home is not the same person that returned home.

Unfortunately, the fate of Will in “Thank You For Your Service” is very predictable.

But clichés in Hollywood are the norm.

And luckily for “Thank You For Your Service” the passion and pain of the characters’ struggle can overcome the Hollywood cliché.