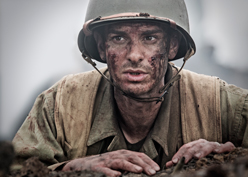 Muhammad Ali’s refusal to fight in the Vietnam War because of his conscientious objector status made sense because America tried to draft him into the armed forces.

Doss had no objection to serving his country as a medic.  He just had firm beliefs against touching a violent weapon because of his strong Christian faith.

His desire to put himself in harms way without a violent weapon to defend himself, made him more of a hero than those willing to kill, and his heroic tale is told superbly and inspirationally in the film “Hacksaw Ridge.”

Some skeptics might believe that people like Doss with strong religious convictions live sheltered and strange lives and have no connection with the real world.

However, often the opposite is the case for people like Doss in “Hacksaw Ridge.”

Although he grew up in a small country Virginia town, he lived a very adventurous life growing up.

Desmond and his brother Hal were typical rambunctious boys growing up.  But a couple of incidents changed Desmond’s outlook on life.

During a typical brotherly fight, he almost kills his brother when he hits him in the head with a brick.

Additionally, he comes close to killing his father later in life when he grows tired of the physical abuse his father inflicts on his mother.

After the incident with his father, he vows to never pick up a gun again.

Despite his meekness, he has strength in faith and a loyalty to his country, which has been passed down the generational lines.

His father fought in World War I and when Hal and other members of the community volunteer to fight to save America’s way of life, Desmond believes he has to follow suit, with one caveat.

He will serve as a medic saving lives, but will not fire a weapon to take someone’s life.

Initially seen as a coward, Doss is remembered as a hero and “Hacksaw Ridge” does an awesome job of keeping his legacy of life.

Garfield is one of the great young talents in Hollywood and has yet to deliver a subpar performance.  He seems to master every accent known to man.

The war scenes in “Hacksaw Ridge” are excruciatingly brutal, with body parts ripping up in front of the eyes of moviegoers.

“Hacksaw Ridge” is full of the locker room talk that Donald Trump infamously defends on the presidential campaign trail.

However, Vince Vaughn’s portrayal as a sergeant is still up for debate.

While he does a good job, one cannot look at Vaughn entering a scene, which is supposed to be a serious drama, and not fall out in laughter.

Vaughn’s mere presence in any movie is hilarious, and like Eddie Murphy in dramatic roles, it is hard not to see him as comedic star.

Despite the casting issues, filmmaker Mel Gibson further proves his genius as a director in “Hacksaw Ridge.”

Gibson brings the battle in Okinawa right into the face of moviegoers over 70 years later, and reintroduces many to the heroism of Desmond Doss.