Film Review: Elba Not As Beastly As Attah in ‘Beasts of No Nation’ 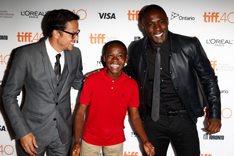 Hollywood will always find it a monumental task to typecast Idris Elba, although some critics may try to downplay his versatility unjustly.


The same actor who played a smooth detective in “Luther” also played the mobster Tango in “American Gangster.”

So it is no surprise that someone who many consider a good candidate for the next James Bond movie could convincingly play a ruthless warlord in the Netflix original movie “Beasts Of No Nation.”

But despite how menacingly good Elba is as Commandant in “Beasts of No Nation,” the silver screen is thoroughly owned by Abraham Attah as the child soldier Agu.

The film “Beasts Of Nation” is so brutally raw that it is sometimes hard to watch with its machete attacks carried out by child warriors like Agu and the sexual improprieties of the adult commanders in charge of the child rebels.

“Beasts of No Nation” depicts a civil war in an unnamed African country that displaces many residents, kills off women, men and children and forces children to fight for their lives alongside rebel forces.

Agu is the typical mischievous child growing up in his African village.

He is so full of life and energy that he practically explodes off of the screen from the get-go with his practical jokes and hustles for money.

His attempt to sell an imagination television, which is an old television without a screen, is simply hilarious.  To make up for the fact that there is only a frame of a TV, Agu and his friends act out television scenes like soap operas, Kung Fu movies and 3-D animation while someone changes the broken channels.

And like all children, he makes his older brother’s life miserable in ways only R. Kelly and his underage mistresses could appreciate.

However, that exuberance is lost forever when Agu is separated from his mother and younger siblings, when his father, older brother and all of the adult males of the village decide to stand up to the army and rebel forces invading their land.

What Agu is forced to do to survive symbolizes the loss of innocence that all people experience at some point in their life but for the fortunate, that experience comes later in life, not as children.

“Beasts of No Nation” is not for the faint of heart, but Netflix’s first original film is definitely a must see to experience the blossoming of Hollywood’s best child actor.

Attah will definitely not break Tatum O’Neal’s record of being the youngest Oscar winner this year, but Hollywood has a new darling who has the charisma to make moviegoers smile and the acting range to make them cry within the same 137 minutes.

Director Cary Joji Fukunaja is brilliantly raw and rough with his approach to “Beasts of No Nation” with brutal and bloody war scenes that are difficult to digest.

In one brilliant war scene, blood is spattered on the camera lens bringing the action as close as possible.

And most of the carnage comes at the directive of the Commandant (Elba).

Although Elba is a convincing warrior in “Beasts of No Nation” and wins some battles, he ultimately loses the war to his younger counterpart, Attah.