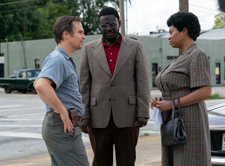 Sure, many people in denial will say segregation and the Civil Rights Movement happened decades ago so why can’t people let sleeping dogs lie?

Well, a possum represents systemic racism more than a dog.

And possums play dead and lull people to sleep before attacking again, and that is very similar to racism.

Just when America thinks it has overcome its past, hate awakens from its sleep and goes on a tirade.

But in actuality, “The Best of Enemies,” which deals with busing and school integration, is just as timely today as it was when the story took place 48 years ago.

And while “The Best of Enemies” relives an ugly chapter in American history, the film shows how people of all colors can come together when they read all of the chapters of a person’s story instead of just focusing on the book cover.

In “The Best of Enemies,” Ann Atwater (Taraji P. Henson, “What Men Want”) is what racists once called a rabble-rouser and troublemaker because of her efforts to fight racism and discrimination against the poor.

Today, racists would call her a race baiter for fighting systemic racism and not settling for second-class citizenship.

In Durham, N.C. in 1971, the entire North Carolina city knows about Ann.

The civil rights activist is a mainstay at city council meetings.

She is a constant presence in the local media.

And she is known for going out of her way to help her people in Durham’s African-American community.

“The Best of Enemies” wastes no time setting the stage for Ann’s activism.

At the beginning of the Robin Bissell directed film, Ann protests the evictions of several low-income African-Americans, especially one single mother, who lives at the mercy of her heartless slumlord.

Despite being a mainstay at civil rights meetings and city council meetings, Ann’s presence amongst the White city councilmen is not always welcome.

Some have learned to tolerate her tenacity while others turn their back on her complaints, literally.

While Ann is famous in Durham’s African-American community and infamous in the city’s White community, C.P. Ellis (Sam Rockwell, “Vice”) is the polar opposite.

C.P. is revered in some White circles because he is the Exalted Cyclops, or president, of the local chapter of the Ku Klux Klan.

But as one can imagine, those who do not subscribe to bigotry, segregation, racism and White supremacy despise C.P.

The local KKK president and his cohorts in crime even show up at city council meetings when Ann speaks to show her that her efforts at equality and fairness will not happen without a fight.

Furthermore, C.P. and his hateful homeboys in the Klan do not only reserve their ire for African-Americans.

They also shoot up the house of a local White girl after neighbors complain about her African-American boyfriend.

But no fight amongst Roughhouse Ann’s organization Operation Breakthrough and the Klan are as explosive as the fight over school integration and busing.

Sure, “The Best of Enemies” takes place in 1971 after the City of Durham has integrated most avenues of life.

What if White girls starting dating their African-American male classmates?

How would that affect the purity of the White race in Durham?

Despite the causes for alarm and the reluctance to take on the issue of school desegregation, Durham has no choice but to take up the issue after the African-American elementary school is destroyed by fire.

If the African-American children are not allowed to attend the all-White school, many if not all of the students will fall years behind in their schooling.

Therefore, those in the 11th grade are actually receiving 10th grade schooling.

In a way to ease his culpability in the school integration matter, the judge overseeing the case leaves it up to the community to decide whether or not they will integrate or remain segregated.

The school district brings in Bill Riddick (Babou Ceesay, “Eye in the Sky”) from Shaw University to oversee a charrette.

The charrette will allow people from all sides of the integration battle to voice their concerns about the issue.

Participants in the charrette will have time to fully associate with someone from a different race and walk of life and see what it is like for the different demographic groups of Durham.

The charrette, which is co-chaired by Ann and C.P., will appoint a Senate consisting of eight members who will then vote on whether or not to fully integrate the Durham schools, along with a couple of other issues.

The Senate will have four African-Americans and four White Americans and will not include militants on either side.

Therefore, the African-American Senate members will have to persuade at least two White Senate members to side with integration over the demands of many of the city’s White residents.

As expected, Henson and Rockwell deliver gripping performances in “The Best of Enemies.”

Henson even perfects that old lady, Down South limping walk that will remind many African-American moviegoers of their grandmothers.

The actress from the Fox soap opera “Empire” even has the old lady pout down pat as well.

“The Best of Enemies” is a great departure from the ghetto but glamorous role of Cookie Lyon on “Empire” that Henson is known for.

She channels her inner-Fannie Lou Hamer in her performance as Ann Atwater in “The Best of Enemies.”

And obviously an actor as talented as Rockwell more than holds his own against the powerful, Henson.

Rockwell will have moviegoers believing he is a racist jerk like Armie Hammer’s performance in “The Birth of a Nation.”

But what this nation will understand after viewing “The Best of Enemies” is that when people get to know each other and get exposed to other cultures, the hatred and bigotry that a person once felt will slowly disappear and turn into acceptance.