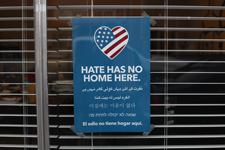 Sequels and spinoffs of iconic movies and television shows can prove tricky.

People often love the originals so much that expectations can become way too high.

While “Skin” is not a sequel or spinoff to the classic movie “American History X” starring Edward Norton and Guy Torry, it kind of feels that way; not as quite as good but very effective just the same.

The film “Skin” comes at the perfect time in American history.

Because of certain people in high places who do not even deserve media attention, America seems torn at the seams when it comes to race, hatred and bigotry.

Instead of bringing people together to end racism, some American leaders have used race to sow divisions as some twisted political ploy to get reelected.

But instead of listening to people who misuse their bully pulpit, people who have become disgusted at race relations in America, Black or White and everything in between, should watch “Skin,” a film based on a true story.

“Skin” depicts the radical transformation of a former skinhead who got indoctrinated at a young age to hate people that did not look like him.

However, the skinhead Bryon “Babs” Widner (Jamie Bell, “Rocketman”), through the help of someone close to him, begins to see the errors of his ways and aims to distance himself from his bigoted past despite the possible consequences and repercussions.

The most shocking scene in “Skin” happens at the beginning of the film.

In the opening scenes of “Skin,” a young child sits in chair as his youthful locks are cut down totally.

The scene symbolizes just how young some people are when they get indoctrinated with hate and ignorance.

But what “Skin” shows, and hopefully America takes note of, is that what is learned can be unlearned.

While Babs is totally committed to the White supremacist mission taught to him from a young age by Ma and Pa, when he meets a young lady named Julie Price (Danielle Macdonald, “Lady Bird”), who has distanced herself and her daughters from racists, a shift begins in Babs.

One can say that the shift had already begun in Babs because even people from Columbus, Ohio’s African-American community like activist Daryle Jenkins (Mike Colter, “Luke Cage”) from the anti-hate group One People’s Project know that clearly Babs is different than his comrades in the movement.

As Daryle tells Babs, he is not like the rest of the White supremacists because he has a heart.

The heart that Babs has is shown clearly when the skinheads have to go out on a mission to aid their movement and their message.

But while Babs already stands out from the rest of the racist that he calls his family, being around Julie and her girls changes him even more.

Often the only way to get out of a gang is dead or through some sort of witness protection program.

The problem with Babs getting a new identity and getting into a witness protection plan is his skin.

While his heart has changed over the years, his skin has not changed and will be difficult to change.

His entire body, including his face, is covered with neo-Nazi tattoos.

Getting a job is difficult, if not impossible.

And going unnoticed is even harder because of the tattoos.

Babs is like a walking and breathing billboard for racist propaganda.

Therefore, in order for his transformation to be complete, he has to change his appearance despite having no money and no prospects for a job because of his choice in body art.

What is astounding with “Skin” is what happens beneath the skin to make someone turn towards White supremacy.

It seems that rich and educated people rarely turn to overt hatred.

Racism usually exists amongst a demographic that feels left out of the American dream despite having every opportunity to make their dreams come true.

In 45-like fashion, the leader of the skinhead group that took Babs in decides to run for congress under the slogan, “Keep America White,” which is essentially what “Make America Great Again” translates to.

But “Skin” shows that it takes real leadership and individuality to rid one’s self of the hatred instilled in them at a young age.

There is no surprise that the Viking Social Club looks to recruit children from broken homes, runaways and abusive families.

Many adults would not fall for the nonsense of a White supremacist group.

However, those looking for something to belong to can easily come under the influence of racist and bigots.

The funny thing about hatred is that it is not only relevant to one race or one demographic.

Before becoming an activist trying to eliminate hate, Daryle let the racism he face turn into hatred towards White people.

But trying to eliminate racism in Columbus, Ohio made Daryle turn away from hatred.

One of his missions is to help other victims of racism avoid turning into bigots themselves.

Additionally, “Skin” allows Colter to showcase his dramatic skills since the cancellation of his superhero Marvel Netflix show, “Luke Cage.”

Likewise, Bell does his thing in “Skin” as well.