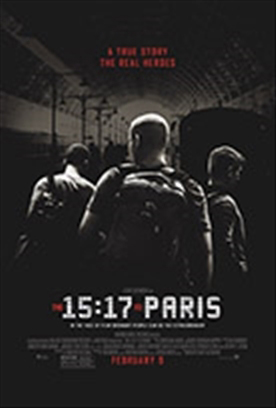 Telling Their Own Story

Getting non-actors to portray themselves or characters like their true personalities can be hit or miss for filmmakers.

Jackie Robinson and Muhammad Ali playing themselves in biopics were misses.

Clint Eastwood’s new film “The 15:17 to Paris” fits somewhere in the middle of “Cooley High” and the Robinson and Ali biopics in that the acting is not award-worthy, but the heroism displayed by three American friends who stopped a terrorist attack in France was award-worthy in real life and their story is nothing but heroic and inspirational.

In “The 15:17 to Paris,” Eastwood depicts true lifelong friendship.

There is nothing like friends who grow up together.

Alek, Spencer and Anthony become as close as brothers in Sacramento, Calif.

The friends are typical mischievous and disobedient adolescent boys.

The friends get in trouble together at their Christian middle school.

The friends play war together in the fields with toy guns.

And the friends daydream together of having more than imaginary girlfriends.

But like many childhood friends, the trio eventually goes their separate ways.

Spencer stays at the Christian school.

Alek moves to Oregon with his father.

And Anthony ventures off to public school so he can discover what it is like to have a girlfriend and go to fun events like the prom.

But like separated friends of the 21st century, the Sacramento, Calif. cohorts stay connected thanks to technology and are still the closest of friends even after high school graduation.

While all three of the children enjoyed history and military stories as children, only Alek immediately enlists in the military after high school.

Spencer works at Jamba Juice, while Anthony also searches for his future in life.

When Spencer finally does enlist, he finds himself in Europe and wants his friends to join him on a trip backpacking throughout the European continent.

However, what should be a fun guy trip filled with new women, adult beverages and selfies turns into God’s calling on their life as they save an entire train from certain death.

“The 15:17 to Paris” contains all of the no-nos for a movie such as predictability and average acting.

Furthermore, the film drags a little with the backstory and the initial days of the European excursion.

But it is still a great film because of the portrayal of heroism of American soldiers and for depicting the true definition of friendship.

Eastwood’s “The 15:17 to Paris” is also a story about faith, purpose and overcoming setbacks.

While schoolteachers wanted Spencer tested for such disabilities as attention deficit disorder, Spencer’s mother taught her son to rely on his faith in God to overcome any obstacle placed in his life.

Furthermore, since childhood Spencer prayed that God would use him as an instrument of peace in such a chaotic and violent world.

He knew his life had a greater purpose and his faith and obedience to his calling led to him becoming a hero and saving the lives of countless passengers on a train.

While the true-life heroes played themselves in the film, their lack of training did not hinder the overall message of the movie.

In actuality, it may have added an authenticity to “The 15:17 to Paris.”

It is often said that no one can tell a person’s story better than the people themselves and Spencer, Alek and Anthony’s story from Paris is definitely a tale worth telling.