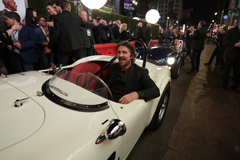 Dust off your tuxedo.

Pick out your most expensive cologne.

Spoil your wife at the hair salon, nail salon and exclusive boutiques.

You have to prepare ahead of time because after your heart-pumping performance in “Ford v Ferrari,” you have to have a spot as a nominee for all of the major movie award shows.

And while “Ford v Ferrari” might not at first-glance interest those not fascinated with NASCAR, the adrenaline rush of a film is more than just racecars.

“Ford v Ferrari” is about knowing one’s purpose in life.

The movie “Ford v Ferrari” is about pursuing one’s dreams and never giving up no matter how long the process takes and no matter how many hurdles one has to jump to get to the finish line.

And “Ford v Ferrari” is about the fact that some people have to do certain things in life or their life will not be complete.

In “Ford v Ferrari,” Carroll Shelby (Matt Damon, “Suburbicon”) and Ken Miles (Bale, “Vice”) know what it means to be destined to only do one thing in life.

The more professional, articulate and reserved Shelby has reached his potential in the racing game.

Unfortunately, a heart ailment takes him off of the racetracks even though racing is the air that he breathes.

On the other end, Miles is that supremely talented person that is more hell bent on self-destruction than on self-preservation.

Despite his knowledge of cars, Ken’s temper runs off good customers at the garage.

Furthermore, his behavior at the racetrack burns so many bridges that his dreams never come true despite his talent.


Therefore, Ken’s life begins to slowly unravel as he loses his means of taking care of his wife Mollie Miles (Caitriona Balfe) and son.

At the same time that Miles’ dreams and career begin unraveling, Ford Motor Company begins to fall apart a little at the seams too.

Once upon a time, seemingly everyone wanted a Ford automobile.

But as teenyboppers of the 1960s try to distance themselves from the styles of their parents and their grandparents, they begin desiring a car sportier than what Ford often produces at the time.

Simultaneously, because of the success of foreign carmakers like Ferrari, Ford begins falling behind in the car-racing arena.

It’s kind of hard to compete with companies like Ferrari on the racetrack when the racer drives a Ford.

He tells his assembly line workers at the Ford plant and his executives like Lee Iacocca (Jon Bernthal) and Leo Beebe (Josh Lucas) in no uncertain terms that if they cannot design a car that wins races and wins money from young Americans desiring a car, they will find themselves desiring a new job.

When a deal for Ford to buy the bankrupt Ferrari company goes up in flames, Ford becomes more determined to defeat Ferrari at races in Daytona Beach, Fla. and Le Mans, France.

The dilemma that Ford faces revolves around the fact that they need the right engineers and drivers to build a car fast and durable enough to beat Ferrari and others on the racetrack.

When Ford reaches out to the legend Shelby, he immediately sees the potential in the gig.

But when Shelby approaches Ken with the job opportunity, he initially scoffs at the opportunity to work with suits from Detroit who know nothing about racecars.

However, Ken’s family has struggled financially since the IRS seized his garage.

All the family has is their home, and Mollie desperately wants to hold on to their only asset.

And while Mollie hates the fact that Ken is contemplating getting back into the racecar business after promising her he would not, the $200 per day plus expenses is enough for her to give Ken her blessing.

“Ford v Ferrari” has enough horsepower to excite fans of all movie genres.

However, “Ford v Ferrari” is so good that even those not obsessed with muscle cars will see the strength in this movie.

“Ford v Ferrari” has some of the best actors in the game with Damon, Bernthal and Lucas.

But the biggest asset of “Ford v Ferrari” is the performance of Bale.

The actor famous for roles in “The Fighter” and “The Dark Knight” is not unfamiliar with great performances.

However, “Ford v Ferrari” should immediately go on the Mt. Rushmore of Bale’s filmography.

Furthermore, young Jupe does a great job too.

The way young Peter looks up to his father is precious and also worrisome.

While Peter has inherited his love for cars from his father, will he inherit his father’s bad traits as well?

When Ken has meltdowns on the track, his son is often close by learning from his father’s bad behavior.

On the contrary, the love and support that Mollie shows to Ken defines ride or die.

Even when things go financially awry for the family, Mollie still has encouraging words and support for Ken’s dreams.

Unfortunately, the choice of songs in “Ford v Ferrari” needs a little improvement.

Sure, the period piece has some good songs like the Motown hit “Money (That’s What I Want).”

But instead of the classic version by Barrett Strong, filmmakers chose a less than stellar cover of the song.

However, when a movie has a stellar performance by Bale, who cares who the movie does not have?