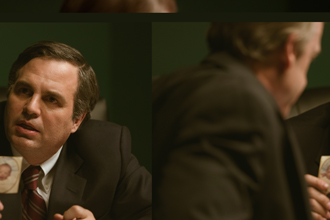 Many corporations do not care about the big problems that they create for common people who have to deal with the consequences and repercussions of their greedy decisions.

The movie “Dark Waters” just represents a microcosm of that reality in heartbreaking and sad reality that will remind many of the current water crises in Flint, Mich.

In “Dark Waters,” Robert Bilott (Mark Ruffalo) sits on top of the world.

He has a beautiful wife named Sarah (Anne Hathaway) and a growing family.

Rob has become a partner at his Ohio law firm, which defends major corporations and the sky seems the limit for his life.

But no matter how far one goes in their career, they should not forget from whence they came.

And no matter what a person tells their grandparents or their parents, as it pertains to their career, one’s elders will always expect a person to do a favor for family or close family friends.

Out of the blue, a man named Wilbur Tennant (Bill Camp) appears in Rob’s law office, telling Rob’s coworkers that he knows the corporate defense attorney.

Although Rob cannot place Wilbur, the disgruntled West Virginia farmer has driven to Cincinnati because he knows Rob’s grandmother, and Grammers has told Wilbur that her grandson will help him in his legal predicament.

Wilbur has a major problem with the giant chemical company, DuPont.

First of all, his biggest problem is that he has a problem with a company as large as DuPont.

Major corporations have general counsel that they pay per month, or on salary, to handle legal claims.

Those companies pay those lawyers regardless if someone has filed a lawsuit against them or not.

Furthermore, companies like DuPont do not have to pay their legal counsel more money if they have to go to court.

Therefore, they can often drag cases out for years and decades until the complainant drops the case because of the excessive legal bills.

All of the reputable lawyers in West Virginia have turned Wilbur down and he travels to Cincinnati to meet with Rob as a last resort.

Wilbur makes money on his own land.

He did not get a fancy college degree.

Wilbur does not speak the King’s English.

However, Wilbur knows when someone has screwed him over.

Those cows provide a living for Wilbur and his family.

Wilbur believes that the cows have gotten sick because they drink from a creek on his farm, which he believes has gotten polluted because of chemicals from DuPont.

He sees no other explanation for the mysterious deaths and behavior of his cows.

In “Dark Waters,” Wilbur is adamant about DuPont’s role in his current family crisis.

Furthermore, he says that his brother died mysteriously after working with chemicals as an employee of DuPont.

Wilbur knows what he knows.

But he needs a lawyer to believe him and voice his concerns for him in court.

In “Dark Waters,” Wilbur wants Rob to tell the world what DuPont has done and is doing.

But does the little man or the common man have a big enough voice to drown out the bullhorns that billion dollar corporations have at their disposal?

In “Dark Waters,” moviegoers will feel the pain that the people of West Virginia endure because of DuPont.

The frustration that reverberates from Wilbur Tennant’s voice almost becomes excruciating because no matter how affluent someone is, they can all relate to the common man stumped out by the powers that be.

Often, corporations and politicians claim they care about the common man and common woman, but often many only care about one common theme, profits and power.

Many successful lawyers care about profits over people as well.

But Robert has his own unique character traits that separate him from the pack in the legal profession.

While many lawyers making partner at their law firm would have graduated to a luxury car, Robert still drives a jalopy and lives in a modest home as he prepares to start his family.

That level-headedness probably is one of the reasons that he cannot just easily dismiss Wilbur Tennant’s allegations against DuPont.

Furthermore, Robert has leadership skills and a brazenness that makes him totally unafraid to go against a chemical giant like DuPont even if his co-workers and bosses seam hesitant to tackle the business behemoth.

But does “David” always defeat “Goliath” as David in the Bible defeats the giant, Goliath?

Well, with Robert fighting for Wilbur anything is possible.

“Dark Waters” is downright scary when people think about how much control major corporations have on the common man and common woman.

Regular folks are often at the mercy of the powerful, and the powerful do not always care about the powerless.

Although “Dark Waters” gets the David versus Goliath theme correct, the film does get some things wrong.

No farmer in West Virginia has that accent.

Wilbur has his own speech inflections and patterns but it does not sound like true West Virginia.

Accents aside, “Dark Waters” captures the reality of what it feels like to be hopeless in a world that refuses to hear you because of your bank account, address or lack of higher education.