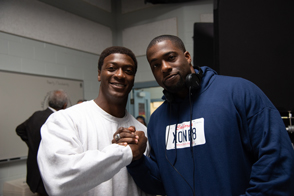 For avid football fans, the tragic story and ultimate triumph of Brian Banks is well known.

The high school football star from Long Beach, Calif. headed to USC to play for championship college coach Pete Carroll has his career completely derailed by allegations of rape.

But although the story received major headlines over the years and fans know the outcome of Banks’ legal situation, the acting and writing in the biopic “Brian Banks” is so riveting that moviegoers who know the story will still find themselves on the edge of their seat.

However, what is sad about “Brian Banks” is that the story takes place almost 20 years after the wrongful convictions of the Central Park Five depicted in Ava Duvernay’s “When They See Us” and the story remains relevant today.

Therefore, with evidence to the contrary, the court system will lock up teenage Black boys and throw away the key even though the convictions sometimes come from bad legal advice or no legal advice at all.

The Central Park Five, now known as the Exonerated Five, got falsely convicted of raping a White female jogger in New York’s Central Park in 1989.

Their convictions did not get overturned until the real rapist had a religious conversion and admitted to the crime decades later.

The DNA of the real rapist was found on the victim while no DNA ever placed the Central Park Five at the scene of the crime.

However, what makes “Brian Banks” so devastating is the fact that the alleged victim never got raped and Banks never even had sex with the girl.

Unfortunately, that did not matter in the eyes of the law.

When it comes to Black men, the judicial system often does not care if Black men are guilty or not, or even if they are in the vicinity of the crime scene when the crime takes place.

The system is often just set up to lock up Black men.

In “Brian Banks,” the titular character (Aldis Hodge, “What Men Want”) did not grow up with a silver spoon in his mouth.

He grew up surrounded by violence and gang activity in Long Beach, Calif.

At the time of his upbringing, the city had a reputation for gang activity and gangsta rap courtesy of rap legends like Snoop Dogg.

Nevertheless, Banks found a refuge in the game of football.

Long Beach Poly High School has a reputation of producing some of the best football prospects in the nation like Pittsburgh Steelers star wide receiver Juju Smith-Schuster and many others.

So to stand out as a linebacker at Poly and get the attention of national college football powerhouse USC did not come by accident.

In the early 2000s, USC won championships with talent such as Reggie Bush, Matt Leinart and Brian Cushing.

And being a high school football star, especially in the state of California, makes one a celebrity in the eyes of the females at school.

That’s all fine and dandy most of the time.

But as D.J. Jazzy Jeff and the Fresh Prince said in their 1988 hit song, “Girls Ain’t Nothing But Trouble.”

In that song, Will Smith (aka The Fresh Prince) is falsely accused of rape.

While the hip-hop duo from Philadelphia made comical rap, getting falsely accused of rape or any crime is no laughing matter especially when you’re too young to understand the legal system and your parents do not have the money to afford the best lawyers.

By chance, Banks runs into his classmate Kennisha Rice (Xosha Roquemore, “Precious”) in the hallways during school and the two make their way to Poly’s 700 building.

That building has a reputation throughout the school as the spot that couples go to for make out sessions.

After making out with Kennisha, Brian gets spooked when he hears a teacher nearby and does not want to go any further.

He leaves the area and advises Kennisha to leave as well.

The fateful episode does not cross Brian’s mind again until police officers storm his bedroom, interrupting a dream of glory on the football field, and arrest him for raping Kennisha.

Although Brian professes his innocence, his lawyer encourages him to take a plea bargain, which will probably result in very little jail time and probation.

Because the court has charged Brian as an adult he cannot consult with his mother Leomia (Sherri Shepherd) before making his decision.

Furthermore, Brian has only 10 minutes to make a decision that will affect the rest of his life.

The result of his hasty decision has a lasting impact on his football career, his job prospects and his relationships with women as he matriculates into adulthood.

First and foremost, the acting in “Brian Banks” is superb.

To those who thought of Shepherd as only a comedian or talk show host, reassess your assumption because her performance as a heartbreaking mother is sometimes painful to bear.

Only a real mother could bring so much heartache to the role.

And as the mother of a young Black boy, Shepherd has probably thought about her young son’s future interaction with law enforcement officials and the judicial system.

The former co-host of “The View” brings that worry to her performance in “Brian Banks.”

Furthermore, Hodge has become one of the bright new stars in Black Hollywood over the last few years.

While actors like Nate Parker and Jason Mitchell have fallen out of favor in Hollywood during the #MeToo movement, Hodge continues to soar in movies like “Straight Outta Compton” and “Hidden Figures.”

But “Brian Banks” gives him the opportunity to shine in the solo spotlight, while he had a supporting role portraying individuals like M.C. Ren in the N.W.A biopic.

The only thing that MIGHT disappoint moviegoers who view “Brian Banks” is knowing the outcome of the film before the final credits role.

But as networks like ESPN Classic have shown, even knowing the outcome of a truly great football game from the past does not stop fans from reliving the riveting action.