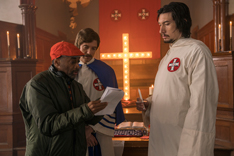 Hollywood seems to have a love/hate relationship with filmmaker Spike Lee.

The Morehouse College alum helped revitalize Black cinema in 1986 with “She’s Gotta Have It,” but has ruffled feathers for speaking truth to power when it comes to racism in America.

However, with “BlacKkKlansman,” Lee recaptures the magic he captured in 1992 with “Malcolm X,” a socially relevant look at race in America that is both culturally monumental and critically acclaimed.

To put it bluntly, Lee’s “BlacKkKlansman” is the filmmaker’s boldest, best and most important film since his biopic on the legendary Nation of Islam leader.

In the 1970s, America remains at a crossroad despite the gains made by the Civil Rights Movement.

Despite the best efforts of some Americans to integrate, the FBI, politicians and law enforcement officials still remain determined to stamp out any semblance of militancy in the Black community.

Many activists like Patrice (Laura Harrier) view Black police officers with the same animosity that they view racist White police officers and she might have good reason.

In “BlacKkKlansman,” the Colorado Springs, Colo. police department is infested with racism.

Cops routinely harass Black people and community activists, even killing unarmed Black children and getting away with it.

The good cops within the department know who the bad cops are, but no one wants to be known throughout the department as a snitch who turns on their brothers in blue.

The police department is a family, and family defends family no matter how wrong they are.

Unfortunately, Ron sticks out like a sore thumb in the all-White police department.

Although he wants to be a detective and see some action, he is initially limited to working in the evidence room until he finally gets his first real assignment.

Hoover wants the FBI and local law enforcement officials to infiltrate the Black Panthers and neutralize their message and their movement.

When civil rights leader Stokely Carmichael/Kwame Ture (Corey Hawkins, “Straight Outta Compton”) is invited to speak at a local college, the Colorado Springs Police Department needs an undercover police officer to infiltrate the meeting and bring back intelligence to the police department.

Obviously, Ron is the only choice for the assignment.

Although Carmichael’s speech contains a lot of strong messages that criticize American racism and police misconduct, Ron walks away from the speech feeling unthreatened, but also inspired by the movement.

He also walks away smitten with Patrice, the president of the school’s Black Student Union.

After the Carmichael investigation proves fruitless, Ron responds to an advertisement in the local Colorado Springs newspaper recruiting potential members for the local chapter of the Ku Klux Klan (KKK).

Using his best White voice as Danny Glover said in the satire “Sorry to Bother You,” Ron answers the ad in hopes of “joining” the “organization.”

He lets the chapter president know that he hates Blacks, Jews and homosexuals and is the perfect candidate for membership into the “organization.”

Ron views infiltrating the KKK as a pressing issue in Colorado Springs before the hate the organization preaches turns to violence.

However, when chapter president Walter Breachway (Ryan Eggold) wants to meet Ron and introduce him to his future brothers, a problem obviously surfaces.

Like an idiot, Ron gives Walter his real name.

And more obvious, Ron is Black and if he shows up to the KKK meet and greet he might soon meet his Maker.

Ron will need a White colleague to portray him in person, while the real Ron continues his telephone relationship with Walter.

Flip (Adam Driver) is chosen to play Ron at the KKK functions.

First, Flip is Jewish and the Klan hates Jews as much as it hates Black Americans.

And second, Flip sounds nothing like Ron and will have to practice mimicking Ron’s speaking voice in order to pull off the undercover operation.

In “BlacKkKlansman,” the intensity that the situation presents is a harsh, rough and real look into how ugly and real hate is in America.

Furthermore, “BlacKkKlansman” shows the parallels that exist between America of yesterday and America of today.

Realistically, not much has changed in the area of race relations in the last 40 or 50 years.

Like David Duke (Topher Grace), President Donald Trump wants to take “his/our” country back from other Americans because of skin color.

Although President Trump would never admit it, his policies are based on making America White again, not great again.

He just considers White to be great and other colors not to be.

Many in White America, especially some White females, still have a fear of Black men and Black masculinity.

The images in the 1915 movie “The Birth of a Nation” by D.W. Griffith where Black men are a physical threat to the safety of White Americans still ring true for some segment of the White community.

That reality is shown every time a White person calls the police on a Black person for playing basketball, selling water or falling asleep in the lobby of their college dormitory.

What is not frustrating is the grand job that Lee does with “BlacKkKlansman.”

Washington is not his famous father Denzel Washington (“The Equalizer 2”), but he does a tremendous job as Ron in “BlacKkKlansman.”

Lee is smart enough to inject the right amount of comedy into such a serious topic because giving it to moviegoers straight, with no chaser, would have been too rough to digest.

The filmmaker brilliantly weaves real footage of Trump and the Charlottesville, Va.  racial attack from 2017 into the end of the film like he included real footage of the Rodney King police beating into the beginning of “Malcolm X.”

Unfortunately, “BlacKkKlansman” would not be a Lee joint if he did not include his trademark walk into the picture.

Lee still creates a film that most people would love with “BlacKkKlansman.”

The only thing that critics can hate about the film is the infamous Lee movie walk.