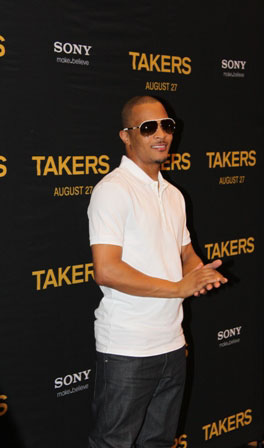 Anyone who meets superstar rapper-actor T.I. will probably walk away with two conclusions.  This young brother is dedicated to his craft and dedicated to not forgetting where he comes from.

His star is destined to shine even brighter with the Aug. 27 release of the Takers movie, in which he shines on-camera as the character Ghost and behind the scenes as well as a producer with his newly-christened company Grand Hustle Films.

“The opportunity was presented to me to be involved as an actor,” explained T.I.  “My agent got me the script…Upon reading the script; I was instantly intrigued, just by the layering of the story line.  I’ve read so many stories with just one story and the fact that it’s an ensemble cast, but each of the members of this cast has their own conflicts, has their own uphill battles, their own conflicts [is what drew me to the film].”

Although initially just offered an opportunity to act in the Takers movie, the creativity and constructive criticism that has made him hip-hop royalty and the self-proclaimed “King of the South” forced its way into the script, ultimately landing him his role as producer.

He began adding depth to his character Ghost, providing background details on the character and his experiences to explain some of his actions and why his criminal comrades have the respect that they have for him.  The soon-to- be classic scenes in the Takers movie about the sheep dog and the bowling ball were T.I. improvisations, because as he says when you work with stars like Idris Elba and Hayden Christensen you have to stay on your toes to pull your weight on screen.

Although hip-hop allows the utmost creativity, many rappers say that they are put into a box by their fan base and are not allowed the creative freedom that film allows.  However, T.I. sees the creative process between movies and music as complete opposite expressions that require a different mind frame when approaching each medium.

“In film, it’s all about the story,” T.I. told Regal Magazine.  “It’s not about me personally or my personal views, thoughts, opinions or beliefs.  It’s about this character, this story and me doing an accurate portrayal of what’s in these pages and getting it to translate on this screen.  Music is a lot more personal.  Music is your thoughts, your ideas, (and) your beliefs coming out of your mouth.  It’s more of an individual effort.”

And his individual effort on camera is paying off with a three film production deal, which includes the Takers movie, for Grand Hustle Films.  He has been blessed to work with Hollywood legends like Denzel Washington, Russell Crowe, Ruby Dee and Will Smith who produced ATL and has soaked up game from all of them.

The emerging thespian is now exploring scripts, one of which is a romantic comedy set in the music industry, which he describes as a hip-hop version of the Eddie Murphy classic Boomerang.

Despite his success on screen, he has no plans of straying too far from his hip-hop roots.  His new album “King Uncaged” will hit stores soon and his clothing line A.K.O.O., which he describes as attire for the “upscale, urban gentleman of leisure” is projected to earn $20 million in profits in 2010.

Not bad for a brother from the notorious Bankhead neighborhood of Atlanta.  From the hip-hop hotbed of the ATL to Hollywood success in films, T.I.’s life has been inspirational to many.  The obstacles he overcame during his childhood on the streets to becoming a success in the music industry to losing his best friend Philant Johnson in a drive by shooting, T.I. keeps pushing forward despite the hardships.  His life is a true example that dreams come true no matter how many nightmares one experiences.

When Regal Magazine asked if fans can expect a T.I. biopic through Grand Hustle Films, his response gave a glimmer of hope for those who want to see the “King” forever immortalized on the big screen.

“Wow, that’s tough,” he told Regal.  “Outside of 8 Mile, I haven’t seen it done in a way that accurately closes the story out.  How do you end the story?  I think that…I don’t know it’s up for discussion.  If it’s something that’s compelling; it would have to be…just an outstanding writer that wrote something that I respect and admire his work and presents a script to me that changes my mind…then it’s open for discussion.  But I’m not just out to seek someone to do a biopic for myself.”

Nevertheless, his fans (hip-hop heads and new fans of the Takers movie) will continue to seek out his life story for inspiration.  And who knows, for a man that says he works too hard to sit back and enjoy his meteoric rise to the top, maybe seeing his accomplishments on the big screen will allow him marvel at how bright his star is actually shining.