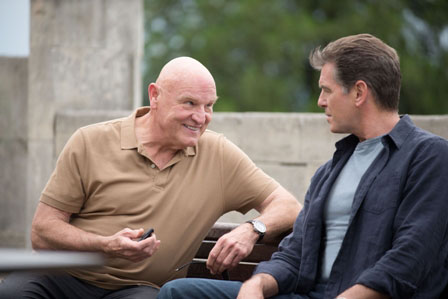 “The November Man” starring Pierce Brosnan is the first one out of the starting block, but the early winner does not always win the race in a track meet or a marathon.

If not for the upcoming Denzel Washington flick “The Equalizer,” which is a great film, “The November Man” might actually be better appreciated it.

The Roger Donaldson-directed movie will benefit from being released before the competition, but Dr. J was once thought of as the most exciting basketball player ever until fans saw Michael Jordan take the game to next level.

In both films, the protagonists play ex-CIA officers who come out of retirement when danger strikes someone dear to them.

In “The November Man,” Devereaux (Brosnan) travels to Moscow to protect a young lady that is special in his life, while in “The Equalizer,” Robert (Washington) battles the Russian mob to protect a new female friend who is forced into prostitution but has a wealth of potential.

Both films show the brilliance that intelligence officers possess, as both heroes battle their adversaries basically single-handed.

“The November Man” is more unique than “The Equalizer” in this regard.

While Robert deals with Russian mobsters and crooked police officers, which unfortunately is a very common problem in the world of organized crime, Devereaux has to deal with crooks on a much larger scale.

A Russian presidential candidate is exterminating all of his former colleagues and acquaintances that can expose his nefarious past and hurt his chances of obtaining the highest position in the land.

One woman has all of the details, but she needs protection from Devereaux to get that information safely to the CIA.

However, in order to keep her safe, he must battle his own CIA partner Dave Mason (Luke Bracey), a person that at one time admired him and looked at him like a father figure.

At one time, Mason would have killed for Devereaux without any reservation, but now he may have to kill him to save himself and his new colleagues.

In Brosnan’s defense, he is every bit as cool, suave and powerful in his performance as Washington is in his.

In addition, the supporting cast of “The November Man” is much more powerful than Washington’s counterparts.

The Australian-born Bracey is a name American moviegoers should get accustomed to quickly.

Obviously, he is not yet on the level of Brosnan, but he holds his own quite nicely against the veteran actor.

And unlike “The Equalizer,” “The November Man” gets off to a quick and violent start, not dragging the audiences through a philosophical beginning.

Nevertheless, it still does not quite measure up to its adversary.

The action is great and the story line is cool, but some of the dialogue towards the end of the picture seems a little over the top despite the seriousness of the plot line.

While “The November Man” will enjoy a decent run at the box office for a few weeks and deservedly so, “The Equalizer” will eventually win the marathon race between Russian/CIA thrillers.