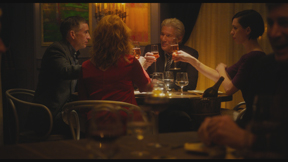 On rapper Warren G’s hit single “I Want it All,” he boasted, “I want it all; houses, expenses, my own business, a truck, hmm, and a couple of Benzes.”

Although actor Richard Gere probably has houses, his own business and a couple of Mercedes Benzes, his two latest movies “The Dinner” and “Norman” prove one cannot have it all.

While “Norman” is O.K., “The Dinner” is extremely below average and might make Gere long for the better days of his career when “An Officer and a Gentleman” and “Pretty Woman” were instant classics.

The movie “The Dinner” falls victim to the “Jungle Fever” trap.

While Lee got away with the crack head distraction because Gator was hilarious, “The Dinner” severely veers off course with the mental instability of the lead character Paul (Steve Coogan).

“The Dinner” is billed as a movie that shows the lengths parents will go through to save their children from youthful mistakes.  But too much time is dedicated to the mental illness of the ticking time bomb named Paul.

Stan (Gere) and Paul are brothers but are as opposite as night and day.

Paul is an angry ex-schoolteacher, while Stan is a successful United States congressman running for governor of his home state.

Despite the volatility of his brother, Stan desperately wants a better relationship with his brother, sister-in-law and nephew, Michael.

In “The Dinner,” Stan is even working feverishly to sponsor a bill that ensures mental healthcare is paid for under the Affordable Care Act.

However, all of those efforts are still not enough to make Paul appreciate his bureaucratic brother, a person he has had a strained relationship with since childhood.

Nevertheless, when their children commit a heinous crime, the family has to come together in a united front in order to save the future of their mischievous children.

But during the dinner, in which the families gather to discuss the problem, the brothers are once again divided on how they should confront the elephant in the room, which are their criminally deviant children.

Unfortunately, “The Dinner” will make moviegoers yearn for dessert or yearn for an expedited check because they cannot wait to leave the restaurant.

Some aspects of “The Dinner” are clever like how the different acts of the movie are titled appetizer, dessert, etc.

The filmmakers also do a good job darkening the movie to coincide with the dark reality the families face together.

But cleverness is not enough to escape mediocrity.

“The Dinner” should have focused totally on Paul’s mental illness or the deviance of the children.

Jumping back and forth from subject to subject makes it impossible for “The Dinner” to become a five-star meal.

The actors all did a great job, but the material they had to work with was not good enough.

“The Dinner” has big names, good acting and clever filmmaking, but not a good, coherent theme.

Unfortunately, Warren G must not have known what he was talking about when he said he wanted it all.

“The Dinner” proves for Gere that even the greatest actors cannot have it all.