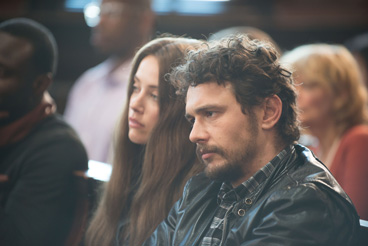 It is funny how people remember what they want to remember.

The good that happens to a person is usually exaggerated.

And the bad that happens to a person is usually blown out of proportion.

Furthermore, people often place blame on others when the blame rests solely on their lap.

What makes the blame game even worse is when people use those distorted memories to promote their own agenda at the expense of others.

In “The Adderall Diaries,” author Stephen Elliot (James Franco) has used his traumatic childhood and turned it into a blockbuster-writing career via different book publishers.

However, how much of his pain and anguish is realistic and how much of it is pure fiction, pulled from a troubled mind?

“The Adderall Diaries” flashes back to many memories from Stephen’s past.

The happy times playing catch with his father.

The beatings he faced at the hands of his father.

He also flashes back to his near drowning and his father’s new family.

Despite his tumultuous upbringing, the world is Stephen’s oyster.

His literary talents have made him famous with many fans attending his book signings and readings.

But when Penguin Books offers him a lucrative deal, he wants to write something that’s out of the box and different than what he is known for.

Elliott pitches a true crime story about Hans Reiser (Christian Slater); a software tycoon who is accused of murder after his estranged wife goes missing.

But instead of drugging herself with Adderall like Stephen, she chooses to forgive and forget the abuse she faced at the hands of her father and move forward with her life, despite the scars.

Despite their different philosophies, Stephen does find a true friend in Lana.

Unfortunately, his demons might ruin his relationship with her like it has with family members and other friends.

“The Adderall Diaries” is an average thriller at best, despite very good actors like Franco and Slater.

In addition, Heard handles her own with her male counterparts in “The Adderall Diaries.”

However, the film could have done much more with its subject matter.

The strained father-son dynamic is as old as mankind.

Filmmakers should have dug a little deeper from a psychology standpoint to determine why boys sometimes have a tenuous relationship with their fathers and a great one with their mothers.

Furthermore, more emphasis should have been placed on why when men reach adulthood they empathize with their father’s mistakes.

Even more importantly, “The Adderall Diaries” should have explored what happened in Stephen’s dad’s childhood to make him hard to get along with as an adult.

Nevertheless, “The Adderall Diaries” is an average, watchable movie thanks to the big names in it.

But because of the big names present, the film should have made a much bigger impact.