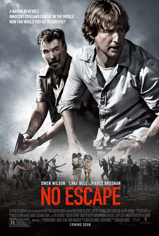 For an actor, the fear that audiences will typecast them because of past performances probably keeps many of them up at night.

Owen Wilson has enjoyed a long and fruitful career, particularly because of his work in comedies like “The Internship” and “The Wedding Crashers.”

Although Wilson has a million fans, about 950,000 of those fans probably never knew he had the acting depth to pull off such a wonderful performance in a dramatic thriller like “No Escape.”

In “No Escape,” Jack Dwyer (Wilson) is forced to uproot his wife and two daughters from Austin, Texas to Asia after his valve invention goes belly up.

His wife Annie (Lake Bell) is instantly apprehensive about the move, a feeling that is amplified when they get to their hotel room and there is no television or Internet access and very little electricity.

Since the Dwyers are cut off from the outside world because of the lack of electronics, they have no clue that the prime minister of the country has been assassinated and rebels are beginning a coup.

The rebels want blood for water, which means they want to kill Americans who have taken over their country and taken over their jobs, like the management job Jack relocates for with a company called Cardiff.

Companies like Cardiff see a lot of benefits for them and America in the Asian country, and have basically forced the people of the country into a form of servitude.

Many films are intense, but “No Escape” is brutally intense from start to finish.

“No Escape” begins with the assassination of the prime minister, and that intensity does not cease until the closing credits.

Jack is a survivor.  The hit song by Destiny’s Child has nothing on him.

His efforts to save his family from an almost certain death is inspiring and the definition of manhood and fatherhood.

The Dwyer daughters, Beeze (Claire Geare) and Lucy (Sterling Jerins) are cute but annoying like many children.  Their loud mouths and stubbornness is another threat to the Dwyers escaping death.

Pierce Brosnan who plays the mysterious Hammond takes the usual comedy role from Wilson, along with his Kenny Rogers obsessed buddy.

The term edge of your seat is so cliché to describe movies but very appropriate when it comes to “No Escape.”

The carnage is stomach churning, but Jack’s strength is motivating and awe-inspiring.

“No Escape” only drags a little between the assassination of the prime minister and the beginning of the coup.

However, Wilsons’ energy and effort never lags in “No Escape.”

And there is no escaping the fact that Wilson’s dramatic performance even surpasses his excellent work in comedies.