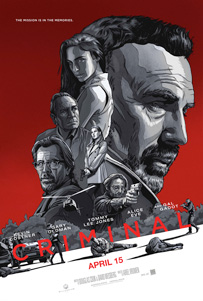 ‘Criminal’ is a Thrill Ride

“Criminal” is an action-packed thrill ride directed by Ariel Vromen.

The plot begins with the quick and bloody showing of super spy Bill Pope (Ryan Reynolds) who had been tracking a Dutch hacker, affectionately named “The Dutchman,” who possesses a wormhole device to the United States nuclear military command.

Who is the lucky recipient?

Why, none other than Jericho Stewart (Kevin Costner), an antisocial convict with a lack of empathy.

His life of confinement and overall absence of human emotions accurately portrays the writer’s short-term goals, while his newly implanted memories reflect the films self-serving objectives.

“Criminal” takes on a sort of modern day “Frankenstein” story.

Jericho goes on a rampage as he is bombarded with memories from the late Bill Pope.

The mission Pope had set out to fulfill before he died is influencing his collective unconscious.

This leads to a strange connection between Jericho and the now-widowed wife, Jill Pope (Gal Gadot).

Through a series of recollections, Jericho fights to remain callous and insensitive, but his doctored brain entices him to be more like Bill.

The cinematography and special effects present in “Criminal” add to the film’s overall exhilarating and action filled storyline.

From high-speed car chases to sci-fi submarine missile launches, there is no shortage of explosions and excitement.

The story takes place in London, specifically the United States Embassy and University of London.

As Jericho roams the streets, the hustle and bustle of downtown London reflects his jumbled mind.

Spanish anarchists, the United States government, and Jericho are all after The Dutchman’s device that is capable of starting World War III.

Jericho’s journey to decide between good and evil is one he has never experienced before.

Prior to the transfer, it’s obvious he would have taken the ransom money offered to The Dutchman himself and stomped anyone who tried to intervene.

However, he is not totally in control anymore and it is the foil between old Jericho and Bill Pope that makes the film so intriguing.

“Criminal,” despite the violent beat-downs and language, is a story about good versus evil; a story about compassion and family that draws the audience in up until the closing credits.

Vromen’s “Criminal” is a thriller that is sure to keep the viewers on their toes as they wait to see what Jericho decides to do.

Overall, the performances in this film were done quite well. There were no lines that seemed forced or awkward and the writer’s use of Jericho’s rugged; intimidating snarl mixed with Bill Pope’s compassionate personality really did the film justice.

In conclusion, I highly recommend “Criminal” for anyone looking for a thrilling tale of a twisted mind filled with plenty of explosions and unexpected turns.