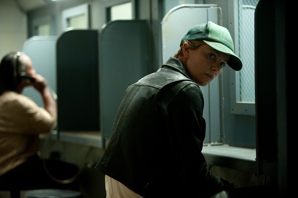 Academy Award winner Charlize Theron is not given enough depth in “Dark Places” to turn darkness into light (Photo Credit: A24 Films).

In 1985, the murders of a majority of the Day family shook their tiny, rural Kansas town.

Young Libby (Sterling Jerins) survives but her two sisters and mother die brutally as a result of gunshot and stab wounds.

Her brother and family outcast Young Ben Day (Tye Sheridan) is charged with the killings and convicted of multiple homicides.

For 30 years, Libby (Charlize Theron, “Monster”) copes with the family tragedy by ignoring that fateful day and in essence ignoring life in general.

She lives off of generous donations from strangers who empathize with her heartbreaking ordeal and sudden status as an orphan.  But by 2015 those generous donations dry up and she is left with only approximately $400 at her disposal.

To catch up on her rent, she agrees to visit The Kill Club, an organization dedicated to solving crimes and exonerating the innocent.

When they pay Libby to speak at The Kill Club, she begins revisiting the worst day of her life, and begins to question whether her brother Ben (Corey Stoll, “House of Cards”) could possibly be innocent of the heinous crimes.

Ben was always an easy target for law enforcement.

His involvement in a satanic cult as a teenager definitely did not endear him to local law enforcement agencies.

And an accusation that he molested little middle school girls makes him a pariah in the eyes of the locals.

But if Ben did not do it, then who is responsible for the murders of the Day family?

Why has Ben never appealed his conviction?

And why did Young Libby testify that her brother committed the murders if he really did not?

“Dark Places,” based on a novel by Gillian Flynn (“Gone Girl”) is an appropriately dark, demonic, wicked and evil film that gets maximum efforts from veterans like Academy Award winner Theron and Stoll.

However, not fully developing the back story of the Day family and the wickedly high expectations created from the success of the “Gone Girl” film leaves “Dark Places” in a slightly above average place, but not a good place.

Ben and Libby discuss the dark anger that exists in the hearts of members of the Day family, but “Dark Places” does not go in depth as to what caused these anger issues despite numerous flashback scenes.

All moviegoers know is that Libby has always had anger issues, Ben is a misfit at school and is into satanic rituals, their father Runner (Sean Bridgers) is a drug dealer without the necessary money to pay off his gambling debts and that their estranged parents had an abusive relationship.

Nonetheless, “Dark Places” is not unpredictable in the sense that moviegoers will not know who the murderer is until the climax.

Unfortunately, those watching “Dark Places” will know who the murderer is not early on in the film.

Regardless, “Dark Places” does give a platform for the immense talents of novelist Flynn.

Usually, fiction is not as suspenseful as real life, but Flynn has a talent so twisted and demented that her ideas from novels are the perfect recipe for a Hollywood thriller.