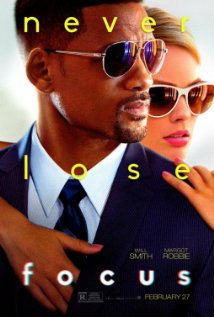 Will Smith became a pop culture icon for his role on “The Fresh Prince of Bel-Air” (better known to the younger generation as Jaden and Willow’s dad).

Soon after, Smith became a box office hit starring in movies like “Independence Day” and “Men in Black,” which catapulted him into the category of one of the “most powerful actors in Hollywood” by Newsweek and listed as one of the “most bankable stars worldwide” by Forbes Magazine.

Although Smith has had some hits and misses at the box office (“After Earth” with his son Jaden being his latest miss), his new film “Focus” is a hit!

In the movie “Focus,” Smith plays a con artist named Nicky who has learned and has become adept at the “art of conning” from his father and grandfather who have a legacy for being the best in the business.

Nicky follows along in their footsteps by pulling off some of the most successful cons, which garners him the respect and admiration of his fellow “colleagues” including Jess Barrett played by Australian actress Margot Robbie who is best known for her breakout role as Naomi Lapaglia in “The Wolf of Wall Street” starring Leonardo DiCaprio.

Robbie received critical acclaim for her role in “The Wolf of Wall Street” and received the Empire Award for Best Newcomer and was dubbed a “scene stealer” for being a young actress new to Hollywood.

Audiences will find themselves cheering for the charming con artist, although he “earns” or rather steals a very good living from innocent people who unknowingly fall victim to the new age of criminal activity. This is clearly shown when the gang pulls off numerous thefts as they hit New Orleans during the big game.

Moviegoers will get a quick overview of how con artists operate, making them think twice about their surroundings in a crowd of people.

Smith fans will be content with the comedic timing he’s known for throughout the movie, putting them in the mindset of an older more mature “Fresh Prince!”

With comedic undertones, “Focus” has some intense scenes throughout the movie, which will have audiences on the edge of their seats.

“Focus” has a few surprises with appearances from B. D. Wong, an American actor of Chinese descent known for his role as Dr. George Huang on “Law & Order: Special Victims Unit.”

Wong plays the character Liyuan, a billionaire who will bet on anything and unknowingly gets conned out of millions by Nicky and his team.

Another nice surprise was Hollywood favorite Gerald McRaney, who’s probably best known for his role as the other half of “Simon and Simon,” a television series about two brothers of contrasting differences and manners who run a private detective agency.

However, today’s generation may know him for his role on “Mike and Molly” as Captain Patrick Murphy or as Raymond Tusk on the Netflix series “House of Cards.”

In the movie “Focus,” McRaney plays a bodyguard for a race car driver.

However, there’s an unexpected twist audiences will not see coming.

Ultimately, it’s nice to see that Smith still has “IT” as moviegoers will be entertained and will not lose focus (pun intended) while watching “Focus!”