Film Review: Thrill is Gone from Thriller ‘The Gift’ 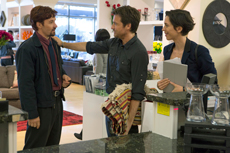 The Thrill is Gone

The “thrill is gone” from the thriller “The Gift.”

The film is definitely not to be compared to movies like “The Boy Next Door,” “Psycho” or “Fatal Attraction,” which had viewers on the edge of their seats, looking over their shoulders or having a nightmare or two.

“The Gift” is simply not a typical thriller.

Set in the suburbs of California, the film centers on Simon (Jason Bateman) and Robyn (Rebecca Hall) as the couple returns to the Golden State after Simon receives a job offer in the securities industry placing him on the fast track to financial success.

Soon after the scene opening with the young couple shopping for a new home, Simon runs into Gordon a.k.a. “Gordo the Weirdo” played by Australian Actor Joel Edgerton, who not only acts in the movie, but also wrote and directed the film.

In the beginning, Simon does not recognize Gordon as an old high school classmate, which is where a sense of uncomfortable “niceties” takes place.

As the movie flows through, audiences will soon realize that the automatic premise of categorizing “Gordo the Weirdo” as a psycho path killer waiting to emerge from his mild manner oddity of bearing gifts is soon diverted as the secrets of Simon’s past come to light.

Those secrets show that Simon clearly has no moral compass as he carriers his childhood antics of being a bully into adulthood to get what he wants in life from getting ahead in his career, to choosing his circle of friends and even choosing his wife.

“Whatever Simon says, he gets” is a line Gordon states in the movie.

Soon after, Simon gives this self-righteous speech as to why and where his crass behavior comes from as he tries to justify to his wife why he does not need to apologize to Gordon for what happened in the past.

“I will not apologize for how Gordo's life turned out. My father was hard on me all the time.  He never let up and look how he turned out. I sucked it up and now I am a success!”

This speech will almost make viewers feel sorry for the character as it seems bullying begets bullying.

However, as the story unfolds the audience is let in on what exactly happened to Gordon from Simon spreading vicious rumors and lies.

What he gets in the end will not only lead viewers to say, “He got exactly what he deserves,” but they will also say, “he should have gotten more.”

Kudos to Bateman for doing a great job playing the antagonist in this movie and making his fans forget the once lovable teen idol from the 1980s!

Praise also goes to Edgerton as Gordo, bringing his script to life on the big through screen through STX Entertainment, a fully-integrated major motion picture and television studio that is founded on the belief that mid-range talent-driven films are currently underrepresented in today’s creative landscape.

Although “The Gift” is not considered the typical thriller, Gordon sums it up with one profound statement that he tells Simon.

“You’re done with the past, but the past is not done with you!”