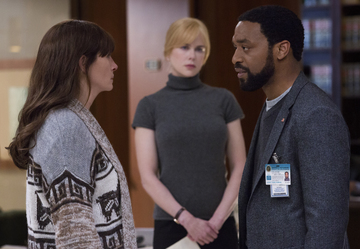 Could you bear knowing the rapist and murderer of your child was walking the streets of Los Angeles, untouched?

Jess, played by Julia Roberts, was in that very position.

In the suspenseful thriller “Secret in Their Eyes,” the Los Angeles District Attorney’s office is thrown for a loop after a series of events while fighting a possible terrorist attack on the city.

Ray, a blue-collar detective played by Chiwetel Ejiofor, is on a mission for justice because he feels he owes it to his good friend and coworker Jess.

Through a dynamic cast, constant tension, and beautiful shots of downtown Los Angeles, “Secret in Their Eyes” makes for a solid viewing experience.

The film begins with the discovery of Jess’s daughter’s lifeless body in a dumpster near a local mosque.

Jess is mortified and Ray makes it his mission to find the culprit.

Ray discovers he can’t fight this alone and decides to go off the grid for 13 years to continue his search for Carolyn’s murderer.

He returns after over a decade with what he thinks is a possible lead on a suspect.

Upon his return, his love interest Claire, played by Nicole Kidman, has been promoted to DA and has been married for years.

The previous DA, Morales, was reluctant to open the case because the prime suspect brought forward by Ray is being used as an insider for counter-terrorism in LA.

The quest for justice knows no bounds as Ray and Claire hope to avenge their friend’s fallen daughter.

Overall, the constant twists and turns that add on to the storyline create a viewing experience that is hard to beat.

The strong leads help create a dynamic film with many surprises sure to bring out the detective in everyone as they try to solve the mystery and catch the killer.

The combined efforts of all the actors made the investigation a grueling task that was enticing to follow.

Along with the suspense in the murder, there was some underlying tension between Ray and Claire throughout the years that shows itself as a driving factor in both their motives.

The main theme of the film is the struggle around who should dictate justice in a murder case.

Should it be the divine powers of a holy entity, the criminal justice system, or a loved one of the victim?

In “Secret in Their Eyes,” the viewer leaves the theater still questioning who really holds that power.

Through a series of sometimes confusing flashbacks, the cast reveals their motives and morals for their quest for justice.

There were not many negatives about the film, however, tying up loose ends and putting some demons to rest could be beneficial overall.

“Secret in Their Eyes” is a suspenseful movie throughout and will make a Sherlock Holmes out of all viewers.

In conclusion, the positives of the film definitely outweigh the negatives, or lack thereof.

All in all, “Secret in Their Eyes” accomplished what some films fail to do, keep a viewer constantly second guessing themselves in a murder investigation.