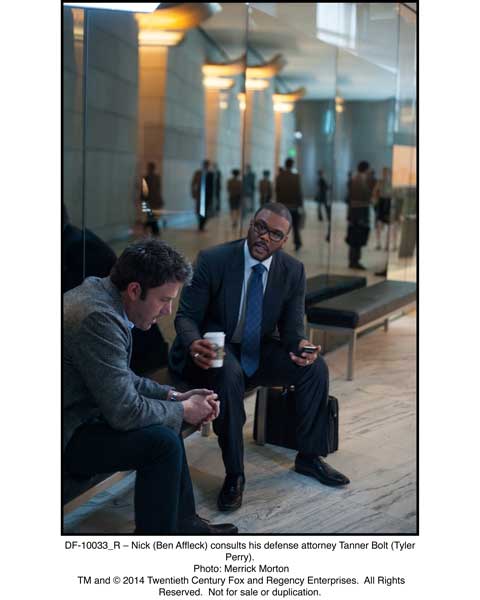 “Gone Girl” is so realistic that it is scary.

With the countless real life tragedies involving the likes of Lacey Peterson and Lori Hacking it is easy to turn on a suspicious husband who reports his wife missing.

Add marital woes, an affair with a beautiful and much younger student and severe money troubles, and you get a case that not even the late Johnny Cochran could win, either in the courtroom or the court of public opinion.

In “Gone Girl,” Nick Dunne (Ben Affleck) initially has the American dream in the palm of his hand.

He has married up in class, after tying the knot with Harvard-educated trust fund collecting writer Amy (Rosamund Pike).

They meet at a party and immediately the attraction is electric.

Their chemistry with one another is not merely physical, but cerebral and philosophical.

Amy and Nick connect on a much more spiritual level than most, both sharing a love for the written word and creativity.

Nick is a writer for a men’s magazine and a creative writing college professor, while Amy has her own advice column called “Ask Amy.”

Her parents even ride Amy’s writing coattails, launching a line of children’s books called “Amazing Amy,” which is a veiled attempt to rewrite their shortcomings as parents.

Despite the fortune and notoriety, the Dunne family cannot escape the grim realities of the real world.

The recession puts a dent in their coffer and when Nick’s mother is stricken with cancer, the young couple moves from the glitz and glamour of “Gotham” to the quiet and quaint reality of Missouri to be closer to Nick’s ailing parents.

However, by their fifth anniversary, the Dunne marriage is at a significant crossroads.

The love is not there anymore.

They cannot agree on whether or not to have children.

In addition, the pretty, puerile and perky Andie (Emily Ratajkowski) has replaced Amy as the love of Nick’s life.

So when Amy disappears from their Missouri home on the day of their anniversary, the investigation centers on Nick who does not have the soundest alibi for his whereabouts at the time of the disappearance.

The house has traces of blood, proof of a physical tussle and a husband who shows no visible sign of anger, stress or grieve despite the fact that his life partner may have been murdered.

“Gone Girl,” based on the novel by Gillian Flynn, has been told so many times in real life by CNN, MSNBC and FOX News that moviegoers who did not read the book will know the outcome from the get-go.

National media pundits will turn on the husband immediately?

Those in the community will be suspicious of the husband even if he participates in the search.

And his less than biblical marriage will give critics all the ammunition in the world to condemn him before the trial.

“Gone Girl” is a brilliant film and by far the best thriller, or movie of any genre, so far in 2014.

Affleck is great as normal, but Pike should be arrested for being so damn good in her portrayal of Amy.

The movie stretches to 149 minutes, but moviegoers would not have complained if Flynn added another 49 minutes to the script.

Furthermore, all of the Tyler Perry haters can sit down for good because the brother is not going anywhere in Hollywood even if he is putting filmmaking to the side to concentrate on television.

Perry breaks his own typecasting to impressively play a F-bomb dropping, R-rated talking lawyer that Cochran himself would have been proud of.

“Gone Girl” can only be criticized for its anticlimactic conclusion and the fact that a key portion of the movie was very predictable even without reading one page of the novel.

Although the film is fiction at its best, it deals so effectively with reality that it will make many question how well they know their significant other and is that fool crazy enough to pull off something as evil as was pulled off in “Gone Girl.”