Film Review: Elba, Winslet Come Up Big in ‘The Mountain Between Us’ 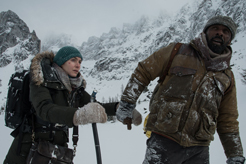 Kate Winslet (left) and Idris Elba are forced to brave the elements in “The Mountain Between Us” (Photo Credit: Kimberley French/Twentieth Century Fox Film Corporation).

The rat race called life often makes people cut corners to get to their desired destination quick, fast and in a hurry.

Sometimes when a delay happens, it is best that people move a little slower because the delay might delay devastation and utter destruction in their lives.

However, many people like Ben Bass (Idris Elba, “The Dark Tower”) and Alex Martin (Kate Winslet, “Collateral Beauty”) in “The Mountain Between Us” cannot handle delay because life has put too much on their plate and they cannot stop until their plate is clean.

That reality and their ultimate decision lead to an intense, inspiring and terrifying experience in “The Mountain Between Us.”

Ben is a neurosurgeon who has to get to his destination to perform emergency surgery on a 10-year-old.

Alex is a photojournalist and has to get home because she is getting married in the next couple of days.

The only problem for Ben and Alex is that inclement weather has grounded all commercial flights and they cannot even get a rental car to drive to another city with better weather.

So when Alex overhears Ben pleading for a way to get to his destination, she devises a plan that will benefit both of them.

Alex suggests to Ben that the two strangers rent out a private plane to get them to Denver.

Once in the “Mile High City,” the two can take a commercial flight to their next destination.

The new “friends” meet Walter (Beau Bridges, “Bloodline”) who owns his own small plane and for a fee he agrees to take the two to their next destination.

However, Walter does not file a flight plan for their excursion for some reason.

Likewise, neither Alex nor Ben tells anyone of his or her plans to take a private plan.

Unfortunately, when the plane goes down in the snowy ice-capped mountains, no one on Earth knows their whereabouts or their condition.

Surviving the harrowing plane crash, it is up to the ingenuity, determination and strength of the neurosurgeon and the photojournalist to find a way off of the mountains and out of the treacherous elements if they are to live much longer.

“The Mountain Between Us” is brilliant because two people carry an entire film.

The film is also interesting because it shows the complexity of human personalities.

One tragic event can change a person forever.

Before a tragic event a person can be one way, and after the tragedy make a 180-degree turn and become a totally different person.

A tragic occurrence can make one closer with a stranger and pull one apart from people they were very close to before.

Like in any movie starring Elba and Winslet, the acting is superb.

The visuals, especially the dramatic plane crash, are splendid.

Unfortunately, the final scene of “The Mountain Between Us” ended too quickly and should have been drawn out a little more by director Hany Abu-Assad.

Furthermore, the ultimate climax in “The Mountain Between Us” is predictable and should have been avoided because it becomes a little too cliché.

Nevertheless, it is a very good cautionary tale about slowing down and appreciating the delays that life sometimes sends.