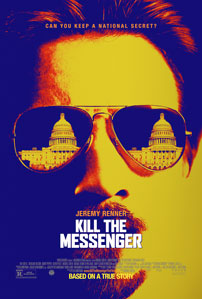 When the European colonists took over American land, many of the early settlers said it was because they were trying to spread Christianity to Native Americans, but at the same time many of those same people promoted African slavery and the brutal killings of Native Americans.

When Americans fought to save the Jewish community from Nazi Germany in World War II, they did it to protect the freedom of others at the hand of discrimination, but still maintained Jim Crow segregation below the Mason-Dixon line.

And according to “Kill the Messenger” and journalist Gary Webb (Jeremy Renner), even after former President Richard Nixon declared illegal drugs as public enemy number one, and former First Lady Nancy Reagan proudly dictated that Americans just say no, the CIA allegedly smuggled cocaine into the United States to earn money to support the Contra rebels during the 1980s.

Gary is the typical small-market journalist.

He has aspirations of breaking the big story as an investigative reporter despite not having the credentials of working for a major market newspaper like the Los Angeles Times.

What he may lack in credentials, he compensates for with enormous support from his editor and publisher at the San Jose Mercury News.

He still believes, as all journalists should, that Americans should know the truth when it pertains to their community, city and country.

After he exposes that the government is seizing the physical property of alleged drug dealers even when they are acquitted, he is contacted by Coral (Paz Vega), the beautiful girlfriend of a notorious drug dealer who has proof that the CIA and drug kingpin Danilo Blandon (Yul Vazquez) are peddling tons of cocaine to fund an illegal war in.

The government, allegedly, is taking the profits from the cocaine sales to purchase weapons for the Contra rebels, who are seeking freedom from a repressive government.

It is believed that President Ronald Reagan knows that he cannot get Congress to OK funding for the war, so he needs to come up with the funds for his mission.

When Gary is able to get several sources to speak off the record on the controversy, the newspaper goes to print, making Gary an instant celebrity, and making the CIA public enemy number one in the eyes of many politicians and civil rights leaders.

However, just like on an episode of ABC’s “Scandal,” the film “Kill the Messenger” shows how far the government can go to silence a whistleblower and save face before the public.

“Kill the Messenger” is ironic because it allegedly shows just how “free” our free press is in America.

While journalists are not jailed for speaking their minds, “imprisonment” can still be the consequence for exposing so-called classified information.

“Kill the Messenger” is basically a picture that exposes alleged hypocrisies in the government, and what they are capable of doing to those who threaten the status quo.

Writer Peter Landesman and director Michael Cuesta are just as bold as Webb to expose some ugly allegations about our beloved country.

Renner is solid as usual in his empathetic portrayal of the journalist.

Furthermore, Vega does a great job channeling her inner-Sofia Vergara in her brief appearance in “Kill the Messenger.”

Furthermore, the film does a great job of accurately portraying the stress that investigative journalism puts on a family because of the lack of quality time that the journalist can actually spend with their family.

The film might not be one that moviegoers would want to watch constantly, but it is a film like “Talk to Me” that should be required for all college journalism students.  Students will see some hypocrisy in their first amendment freedoms and how those sometimes-vanishing freedoms can lead to a loss of one’s true freedom and sanity.