Movie Review: ‘The Boy Next Door’ Sizzles with Chemistry 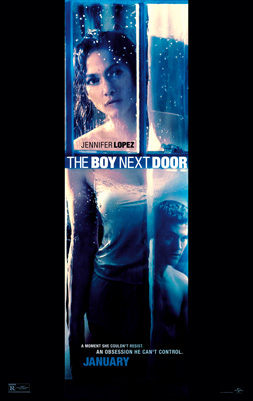 Not the Stereotypical Boy Next Door

“The Boy Next Door” starring the multitalented Jennifer Lopez a.k.a. “Jenny from the Block” reminds movie audiences as to why she has been dubbed a “Triple Threat” in the industry!

Known for her dancing, singing and acting, “J-Lo” does not disappoint in this “edge of your seat” thriller about a young man who moves in next door and is seemingly harmless…until a night of forbidden passion with high school teacher Claire Peterson (Lopez) uncovers his not so boyish next door charm.

Surprisingly, “The Boy Next Door” will take audiences through a gambit of emotions including some comic relief from the lovable and also multitalented Kristin Chenoweth who plays Claire’s best friend and co-worker Vicky.

During “The Boy Next Door,” Vicky jokes that there is something a little off about Noah, (the boy next door) because he’s a teenager who likes the classics in American Literature.

Although the comment was stated as comic relief, it is foreshadowing of what’s to come.

“The Boy Next Door” (Noah) played by newcomer Ryan Guzman landed his big break in the dance movie “Step Up: Revolution” (2012).

Although his background includes modeling and mixed martial arts, Guzman “steps up” in this lead role capturing and holding the audience’s attention throughout the movie as he torments and unravels Claire Peterson’s life.

Although the movie has an “R” rating, the chemistry between Lopez and Guzman’s character is so HOT it comes close to being rated “X!”

Not much nudity is shown; however the sexual orchestration speaks volumes as it implies certain positions akin to a pornographic movie.

However, this scene is a pivotal part of the movie as it shows how vulnerable Claire is in that moment and how conniving Noah is, which sets the tone for the rest of the movie.

There are two nice surprises in the movie with roles played by John Corbett as Claire’s estranged husband Garrett Peterson.

Corbett gained popularity for his role as Chris Stevens on “Northern Exposure” and then as Carrie Bradshaw’s boyfriend on “Sex and the City.”

Although it’s nice to see Corbett acting again, he was not believable in the role as Claire’s cheating husband, driving around in a pimped-out Dodge Charger.

With someone as attractive as Lopez, a stronger male actor should have been her opposite like Dwayne “The Rock” Johnson or Adam Rodriguez from “CSI: Miami” especially with someone like Guzman as the strong antagonist male in the movie.

Fans of the actor Hill Harper will be excited to see the bestselling author on the big screen.

Mostly known for his portrayal of Dr. Sheldon Hawkes in the CBS television show “CSI: N.Y.,” Harper is cast as Edward Warren, a no holds barred high school principal who runs a tight ship.

With only a few small scenes in the movie, Harper’s role, like Corbett’s, were strategically placed, memorable and impactful.

“The Boy Next Door” is a good date night movie that will hold your attention from beginning to end.

However, it is definitely not recommended for the children.