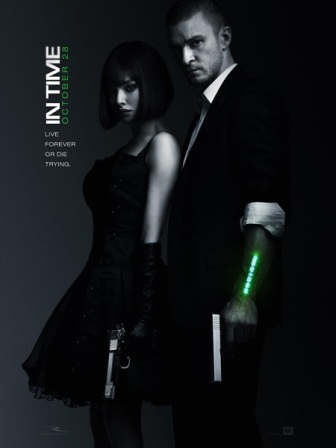 Do Not Waste Your Time

The concepts of some films are much better than the execution of the same films in many cases.  The In Time film featuring Justin Timberlake and Olivia Wilde would definitely fall into the category.

The In Time film shows Timberlake in a different type of role than moviegoers are accustomed to seeing him, but the film is just not worth the time it takes to sit through it in a theater.

The old cliché “time is money” is a perfect slogan for this film, because the characters live in a society where they do not spend or earn money, they spend or earn more time on Earth.  The natural order of their society is a direct correlation to the statement “the rich get richer and the poor get poorer.”

No one ages past 25, but many in the ghettoes struggle to live past their additional allotted one year’s time because time, like money, in our society is controlled by the haves and not the have nots.

Timberlake plays Will Salas, a hard working, but good natured young man, from the ghetto, who like his deceased father has a desire to share his time with others in the ghetto, despite guaranteeing he will not have longevity of life himself.

While at a local bar with his best friend Borel (Johnny Galecki) he meets a wealthy man by the name of Henry Hamilton (Matt Bomer) who possess over a century of time, but is determined to die and pass his time to all of the have nots in the local bar.

After being chased by a band of thugs for his time, Henry gives all of his time to Will, in essence committing suicide and disrupting the natural order of their society.  Will wants to share his time with his dying mother Rachel (Olivia Wilde), but she dies in his arm before he can transfer his time and take her to the other side of town, where the people from time live.

Determined to “stick it to the man,” Will decides to use his newfound time and take the wealthy for everything they have and spread the wealth to those struggling in the ghetto.  However, the “time keepers,” who are a band of rogue cops determined to maintain the natural order, began searching for Will, accusing him of killing and robbing Henry.

Those who “come from time” live forever, while those living in the ghetto struggle for survival, living day-to-day.

While visiting the other side of the tracks, Will romances Sylvia Weis (Amanda Seyfried), the daughter of a man who possess millions of years of time, which guarantees his family’s immortality.  Despite immortality, Sylvia feels suffocated by her protective father who surrounds her with guards hired to save her life and keep that time in the Weis family.

After becoming romantically involved with Will, Sylvia longs for the adventure that her father has shielded her from and becomes sympathetic to those struggling to survive in the streets of the ghettoes.

The In Time film could have been a decent film if executed better.  It shows us that time on Earth is sometimes just as valuable as money, but moviegoers should definitely save their money and pick a better film to watch this weekend.