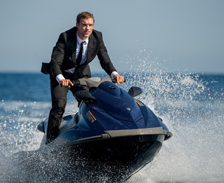 The topic of human sex trafficking needs as much attention as it can possibly receive.

The horrendous fact that many young girls get kidnapped and are forced to become prostitutes with no way out is the tragedy of the 21st century.

Sex trafficking needs as much attention on the big and small screen as possible, but it is a tragedy that the recent attention this crime will receive is via “The Transporter Refueled.”

In the French Riviera in 1995, Russian mobster Arkady Karasov (Radivoje Bukvic) makes his presence known as soon as he sets foot in the south of France.

Arkady and his entourage pull up to a house of ill repute and open fire on the competition.

He lets one of his competitors live so that they can put word out on the street that there is a new sheriff in town, and his crew now runs the prostitution business in the south of France.

Girls and women are forced to sell their bodies or risk death.

Unfortunately, death is the only way out of the life of sexual servitude, and after 15 years of bondage some of Arkady’s girls would rather go out on their sword than to subjugate themselves any longer to the atrocities of sex trafficking.

The only way to get out of the prostitution ring totally is to rid themselves completely of their captors.

But in order to do that, they need someone who can transport them around the French Riviera.

They hire Frank Martin (Ed Skrein) to transport them on their mission to get revenge on their captors, but in order to do so they need a little insurance to make sure that the transporter is forced to comply with their demands.

“The Transporter Refueled” is mediocre at best.

So much more could have been done with this story, but “The Transporter Refueled” is saddled down with lame dialogue, unrealistic fighting scenes and bad acting when a rare death does happen.

The film has so many fighting scenes that Frank escapes from, but he does so without many people dying, which is far-fetched considering the precarious circumstances he must fight his way out of.

When one of Frank’s enemies die, the scene that captures him falling to his death is so poorly acted that I am beginning to think I have a future in acting.

I know I could have executed that fall better than that.

Nevertheless, “The Transporter Refueled” did contain a few player elements.

Frank is able to electronically change his license plates to avoid detection from law enforcement.

Furthermore, his father Frank Senior (Ray Stevenson) is the epitome of old school cool, even nabbing twice as many young women than his much younger son.

In one scene, two of the prostitutes seeking freedom, tell each other “all for one, one for all.”

That is an overused cliché that nobody uses in a real conversation in the 21st century, especially not two beautiful women.