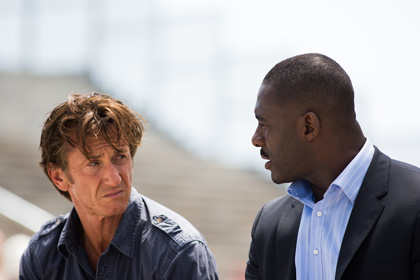 I like movie characters that are full, flawed with flair.

Characters that are violent for violence sake and have no depth or sense of morality are unrealistic and unappealing.

However, characters like Jim Terrier (Sean Penn) from “The Gunman” add a needed element to crime movies.

Some criminals have to do what they have to do but that does not mean they enjoy it or that it doesn’t beget repercussions.

Jim is a sniper working in the Congo under the guise of security.

However, his unit has been working with the rebels in the Congo trying to benefit from the vast mineral wealth of the African country.

When the minister of mining in the Congo cancels all of the mineral contracts, he becomes a threat to their operation and Project Calvary is implemented to permanently eliminate the roadblocks confronting the rebels.

Project Calvary requires one of the snipers to assassinate the minister of mining, but the assassin has to evacuate the continent immediately and “forget” his actions even quicker.

The only civilian that participates in Project Calvary is Felix (Javier Bardem) who has his nose wide open for Jim’s girlfriend Annie (Jasmine Trinca).

Despite the fact that Annie is in a happy relationship with Jim, Felix’s infatuation with Annie is obvious and never ceases.

It is definitely no surprise, especially to Jim, that he is chosen to assassinate the minister, forcing him to leave the Congo and any future he has with Annie.

Nevertheless, his love for Annie brings him back to the Congo eight years later, searching for his old love and a new sense of peace working as an aid worker bringing clean water to the people of the Congo.

Despite keeping a low profile for almost a decade, Jim finds himself the target of assassin’s bullets himself and he needs the assistance of people like Stanley (Ray Winstone) and DuPont (Idris Elba) to blow the lid off of Project Calvary.

“The Gunman” is thrilling, intense, complex and compassionate.

The Pierre Morel directed film makes up for a below average beginning with a very good ending.

“The Gunman” is a crime film that the normal, everyday civilian can relate to with its tales of remorse, illness, jealousy and love.

In a metaphorical way, “The Gunman” has a 2Pac “Me Against the World” mentality.

Like 2Pac, Jim might have all the odds stacked against him and he may have all of the powers that be trying to eliminate him, but he refuses to go down without a fight.

In fact, he refuses to wait and defend himself.  He forces his adversaries to go on the defensive, taking the fight to them whether in the Congo, London or Barcelona, Spain.

“The Gunman” is a virtual shooting range (not a playground) for Academy Award winners such as Penn and Bardem, but Morel should have used Elba (who should have won an Academy Award for “Mandela: Long Walk to Freedom”) more.

Furthermore, the film will be unfortunately compared to “Run All Night,” another crime movie that is currently second at the box office and slightly better than “The Gunman.”

Nonetheless, writers Don MacPherson, Jean-Patrick Manchette and Pete Travis should be commended for an exquisite job developing a complicated killer who still has kindness and compassion in his heart.