Film Review: ‘mother!’ Too Weird For Own Good 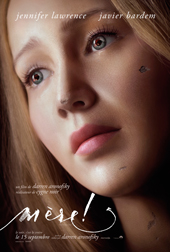 What in the What?

In the 1990s, Philadelphia-based comedian Michael Blackson faced a dilemma.

The word M.F. had become his most popular word on the comedy circuit, but now BET’s hit show “Comic View” had come calling and he could not say that word on cable television.

He came up with the word “modasucka” in his trademark Ghanaian accent to replace the more vulgar form of the word.

Thank God for Blackson’s word, because cussing is not allowed on RegalMag.com, but edited cussing is needed to write about the film “mother!”

Anticipation for “mother!” hit an all time high going into the screening.

However, coming out of the screening, anticipation turned into bewilderment and certain words a Christian should not think.

What in the you-know what was that?  What was that “modasuckin’” writer/director Darren Aronofsky (“Black Swan”) thinking about?

And moviegoers would have to be out of their “modasuckin’” mind to like this film?

“Mother!” supposedly contained a hidden message or allegory, of feminism and female empowerment.

Halfway through the film, all appeared well.

However, the film fell completely apart after the bizarre ending that has to be the weirdest thing ever seen on the big screen.

Mother has placed her dreams and ambitions on the back burner to support her writer’s block having author husband simply named Him (Javier Bardem).

She is renovating an idyllic country home for Him.

She cooks and cleans for Him.

She believes in his writing ability even when Him does not believe in himself.

However, when a strange family arrives on their doorstep and Him invites them to stay with them, their idyllic lifestyle becomes anything but idyllic.

The couple’s guests that include Man (Ed Harris), his wife Woman (Michelle Pfeiffer), and their kids Younger Brother (Brian Gleeson) and Oldest Son (Domhall Gleeson) give Him inspiration for his next book, but they drive Mother insane.

Nevertheless, Them as the family should be called give Mother the inspiration to finally start speaking up for herself and asserting her power in the household.

Not trying to be overly harsh, but “mother!” left me in “modasuckin’” bewilderment.

Filmmaker Aronofsky is a genius, but like they say there is a fine line between genius and crazy, and Aronofsky definitely crossed it with his latest film.

Sure, there will be film critics who love it and try to think too deeply about the hidden message.

Many of those critics are probably just trying to sound deeper than they really are.

Some critics will say they love filmmakers who stretch the boundaries, take chances and are different.

But this “modasuckin’” film is way too different.

Even Lawrence said she might not work with Aronofsky after this one.

Nevertheless, art is subjective and “mother!” is most definitely abstract art in the form of a motion picture.

But sometimes films can become too artistic and too different and that takes away from the message of the film.

Aronofsky had a great opportunity to make a film about female empowerment, but the message is lost in “modasuckin’” weirdness.