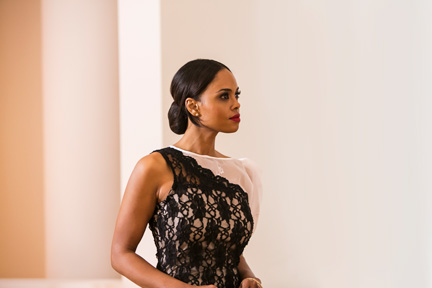 And according to “Addicted” based on the novel by Zane, for some like Zoe (Sharon Leal), it is never enough to satisfy her sexual dysfunction.

“Addicted” is available on DVD and on demand on Feb. 10.

Addiction, in its endless forms, has cost many couples their marriage.

However, sex addiction is often overlooked or looked at flippantly within the world of addiction, but the consequences can be just as fatal and the addiction is just as intoxicating as taking one’s first hit or first drink.

Popular erotica novelist Zane should receive applause for shining a light on sex addiction, but “Addicted” is not the right film to educate people on this issue, and not interesting or believable enough to captivate her enormous fan base.

On the exterior, Zoe has the perfect life.

She runs a successful art dealing agency, has a beautiful home, two great children and is married to her first love and high school sweetheart Jason (Boris Kodjoe).

The loving couple often has sex three times a day, but that is not enough to satisfy Zoe’s desires.

However, when she signs artist Quinton Canosa (William Levy) to her art company, the two begin a tryst that satisfies all of her fantasies.

Unfortunately, fantasies can turn quickly into nightmares, as the adulterous affair puts her marriage and career in serious jeopardy.

In “Addicted,” Zoe’s story is told through her therapy sessions with Dr. Marcella Spencer (Tasha Smith) in a more subdued role for the outspoken actress who has mastered loud roles.

While “Addicted” is obviously aimed at the female demographic, director Billie Woodruff does a good job of inserting some sexy women for the fellas such as Leal and the gorgeous Kat Graham who plays Diamond.

Nevertheless, too much of the story is not believable while not enough time is given to the root cause of her addiction and her time in the hospital.

The actors do a good job not overacting in a movie that is supposed to be a thriller.  But the film is less thrilling than it needs to be and the temperament of some of the characters changes too inexplicably and spontaneously.

On a serious note, the special features include the usual deleted scenes, etc.

But the most profound feature is the “Intimate with Zane” feature.

She details how women thank her for shining a light on their sexual desires and allowing them to see they are not alone in their struggles.

Furthermore, she talked about the transparency that is needed for a successful marriage, and how if a man really loves his wife then he would help her overcome her addiction and would understand the seriousness of her condition.  Because at the end of the day, each spouse in a marriage needs to feel that love from their significant other especially when they are battling such aggressive demons.