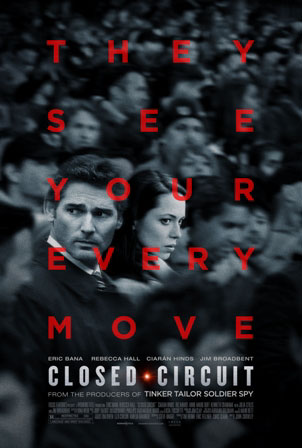 Conspiracy theorists will love the film “Closed Circuit.”  Terrorist attacks have become so commonplace that some wonder if governments play a role in the tragic deaths of their own people during national catastrophes like Sept. 11.

In “Closed Circuit,” a borough bombing in West London shocks an entire country.  The country is ready for the trial of the century after the capture of the alleged mastermind behind the bombing, Farroukh Erdogan (Denis Moschitto), which kills over 100 innocent civilians.

The country has the perfect opportunity to show the world how great their justice system works and how adamant they are about stopping terrorism.

The only problem is that the prosecution has secret evidence that could destroy the very foundation of the country, and if the defense finds out what information they are hiding, it could lead to the death of anyone who tries to bring down their case.

Martin Rose (Eric Bana) and Claudia Simmons-Howe (Rebecca Hall) are former lovers who are tasked with representing the defendant Farroukh after the untimely death of his former lawyer Simon.  Their adulterous affair ended Martin’s marriage and could very well end their professional career.  Although they are representing the same client, they are forbidden to contact each other about the case or risk losing their legal careers.

Unfortunately, they are only paired together because their past history gives the government leverage if the two happen to find out the truth behind the borough bombing.  The government keeps a close watch on all that they do, professionally and personally, and have the ability to eliminate the duo if they get too close to the truth.

Although the cast will not jump off of the screen with star power, the actors do an excellent job of portraying their respective characters.

Unfortunately, “Closed Circuit,” deals with an issue that is all too common in our society where the possibility of terrorism is a daily reality.  Furthermore, we live in an era in which the government can turn on its own people if they do not stay in line, like recent allegations in Syria of a chemical attack on Syrian civilians.

The constant surveillance that the government can place a citizen under is downright scary and is something that Americans are dealing with as a result of the Eric Snowden controversy.

But if there was ever a movie that is right on time with recent events on the world stage it is “Closed Circuit.”  And while the film is not great, it is definitely good enough to have moviegoers on the edge of their seat.

However, “Closed Circuit” has the ability to leave one clueless if one does not fully comprehend the first few minutes of the film.  It is such an intense thriller that it can leave one in the dust with its governmental and military jargon, which can be hard to comprehend for the casual fan of suspense movies.

Nevertheless, the film gives credibility to conspiracy theories and makes one wonder if the government ever tells civilians the complete truth in matters of importance.