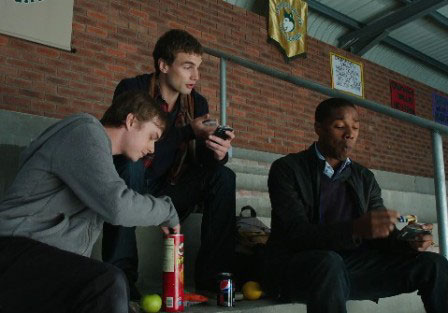 Michael B. Jordan (far right) is making a name for himself after roles in Chronicle and Red Tails.

A Tale of Two Halves

Sadly, Andrew Detmer, played by Dane DeHaan is the typical teenager.  Already going through those awkward teen years, he is not only bullied at school for being different, but is bullied at home by an alcoholic father as well.

His father was forced into retirement from the fire department after suffering an injury on the job and his beloved mother is on her death bed, struggling to hang on to life.  Matt Garetty (Alex Russell) is reluctantly Andrew’s only friend, only because they are cousins.  Andrew refuses to open up to anyone including his family, finding comfort in recording his thoughts and experiences with a camcorder.

In the Chronicle film, Matt and Steve Montgomery (Michael B. Jordan) stumble upon a deep hole in a field while attending a rave, and are suddenly blessed with telekinesis, which is the supposed ability to move objects at a distance by mental power or other nonphysical means.

In the first half of the Chronicle film, Steve, Matt and Andrew use their powers in ways you would expect teenage boys to use it and their shenanigans are highly comical.  They move people’s automobiles in parking lots, laughing at their facial expression when they think it is stolen.  They chase children in toy stores with flying stuffed animals, yelling at them to “stay in school” while the terrified children run off in horror.

Most importantly they use their telekinesis to impress girls at talent shows and parties, which leads to a memorable encounter with Andrew and his first female companion.

For Steve (who’s running for senior class president) and Matt, the popularity at their high school that they are experiencing is nothing new, but for Andrew it changes his entire outlook on life, which makes his social life much better, but makes his family life suffer because his alcoholic father is not pleased with his sudden happiness.

However, after a terrible accident, Andrew the social misfit returns, with powers that he uses to make all his tormenters the bullied and him the bully.

Unfortunately, this is when the Chronicle film goes terribly wrong.  What starts off as a comical coming of age film focusing on a social misfit turned social celebrity, turns into silliness when Andrew terrorizes not only his peers, but his family and the entire city of Seattle.

Andrew goes on a rage that is hard for anyone to contain, including the police, however his rage and hate turn the Chronicle film from a likable movie to one not-so-likable.

However, what the Chronicle film does depict is the trials and tribulations that teenagers go through daily and the consequences that occur when the bullied lash out against those that bully them.  For Andrew, it is his father and classmates that are the bullies, but his response to a lesser degree are the response that so many tortured souls resort to when they cannot withstand any more torture.

And although, the Chronicle film only does an average job portraying the life of a victim of bullying, the consequences in real life can be just as tragic to Andrew’s.