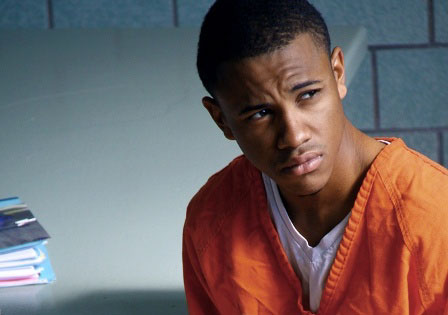 What if Lee (Tequan Richmond) met the age requirement for the military when a recruiter tried to get him to enlist?

What if the store clerk had called the cops on Lee when he got caught shoplifting?

What if the CPS worker had reported that John (Isaiah Washington) threatened him when he tried to find the whereabouts of his three children and their mother, despite the restraining order?

What if John’s friend Ray (Tim Blake Nelson) had confronted him after he tricked out his Chevrolet Caprice into an assassin’s den?

What if we had never heard of John Lee Muhammad and Lee Boyd Malvo?  If the warning signs had been heeded, two of the biggest mass murderers in American history would have remained anonymous and there would be no need for the film “Blue Caprice.”

However, there is a need for a movie like “Blue Caprice,” and director Alexandre Moors paints a chilling and masterful portrait of what leads a person to such hate and violence, and what happens when people ignore the warning signs that are so obvious in hindsight.

Richmond becomes a star right before our very eyes and Washington reminds moviegoers why he was one of the highest paid actors on television back in his “Grey’s Anatomy” days.

Like the “Titanic,” before anyone enters the theater, they know the outcome of “Blue Caprice.”

The random killings that swept the Washington, D.C. area were a time of utter destruction and chaos.

However, “Blue Caprice” delves into the chaos that created killers out of Muhammad and Malvo, without really being a biopic for obvious reasons.

Lee’s mother is abusive and non-existent many times because of work.  The teenager from Antigua, like most, wants the stability of a family life and parents that care.

While wandering aimlessly through his home country, he notices John, a seemingly doting father to his three young children.  He follows them throughout the town, marveling at the seemingly happy family, longing for that same happiness.

However, John’s dedication to his children is a façade, and he is wanted for kidnapping his children from their mother who has sole custody.

Nevertheless, John and Lee eventually meet and both fulfill a void for the other.  Lee becomes John’s de facto son and John becomes Lee’s surrogate father.

Like most fathers, John attempts to instill his wisdom and knowledge of the world to his new son.

Essentially, “Blue Caprice” teaches people what can go wrong when civilians are taught by the military and others how to hate and kill.

Furthermore, “Blue Caprice” teaches people what can happen when vulnerable and impressionable children get the wrong kind of male influence, and how not being there for children can ruin a life before it starts.

What if Lee’s mother would have never abandoned him?

What if he had found a positive father figure when he was most vulnerable?

What if Ray had never taught young Lee how to shoot a gun?

If those things had occurred, the story behind “Blue Caprice” would have been very different and possibly never told.