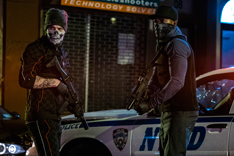 The storyline in “21 Bridges” has been seen on the big screen before.

However, that fact does not stop the adrenaline rush known as “21 Bridges.”

And despite some predictability, with Chadwick Boseman in the lead, “21 Bridges” comes off as an intense bloodbath that will keep moviegoers interested throughout the duration of the film.

Ask yourself this question.

Have you ever met a person that you know had one destiny in life?

Whether that person had athletic talent or musical talent, people knew from Jump Street that God put them on Earth for one specific purpose.

Andre (Boseman) would qualify as such a person.

Law enforcement runs in his DNA.

Andre’s father Reginald lost his life in the line of duty, succumbing to the bullets from a cop killer.

But even in a short span during Andre’s childhood, Reginald made a huge impact on the force and throughout the city of New York.

Throughout Reginald’s career, it was as if he did God’s work, punishing those who had not lived according to the rules.

The same gifts that Reginald possessed got passed down to Young Andre (Christian Isaiah), according to many on the police force.

Andre has a no-nonsense approach to justice and has no remorse for applying deadly force in the line of duty when necessary.

Therefore, when Andre gets called into internal affairs at the beginning of “21 Bridges” it does not faze him.

But in all of those killings, the deceased fired at the officer first.

When asked if he had any remorse for taking a life or if he has any nightmares about the deceased, Andre informs his superiors that he does not.

Andre does not feel remorse because in his opinion there are only two options in life, the wrong and the right options.

Those who are in the right will always get vindicated.

Unfortunately, those in the wrong will experience the consequences and repercussions of their decisions.

Michael (Stephan James) and Ray (Taylor Kitsch) make one of those aforementioned wrong decisions in “21 Bridges.”

Ray and Michael are not dope dealers or even real killers per se.

They are stick up kids.

The dynamic duo robs drug dealers and then sells the stolen product to rival drug dealers.

Usually, robbing drug dealers is only dangerous when it comes to street justice better known as retaliation.

But because drug dealing is illegal, no drug dealer in his or her right mind will call the cops and tell them somebody stole their dope.

Michael and Ray receive an assignment to rob a drug dealer of 30 kilos of cocaine.

However, when they get to the dope spot, the 30 kilos is a bit of a miscalculation to put it mildly.

Instead of coming up on 30 kilos, Michael and Ray stumble upon 300 kilos of cocaine.

The robbery victim even laughs at them saying that with only two robbers they will be there all night trying to take all of the cocaine.

But Michael and Ray’s only problem is not trying to carry 300 kilos of cocaine by themselves.

The real problem that the stick up kids encounter is when about eight police officers arrive at the dope spot, barricading them in the building.

In the aftermath of the bloodbath, seven police officers die and one fights for her life on life support.

Despite getting out of one predicament, Michael and Ray have a long way to go to escape their current situation.

If a person kills one police officer, they are often a dead person walking.

If a person kills multiple police officers, they probably do not have a chance to survive for 24 hours.

Knowing that it will be hard for the culprits to unload that much dope outside of certain areas of New York, Andre orders all the bridges out of Manhattan, N.Y. closed, also closing tunnels and rivers in order to box the cop killers into a certain area.

The catch is, the FBI has only given Andre until 5 A.M. to catch the culprits before they reopen the city making it easier for the criminals to leave the New York area.

Black Hollywood knows the artistic exploits of Boseman after career defining performances in “Get On Up” and “Marshall.”

But more people need to show love to James who has to be one of the next few Black actors to receive major award consideration for their movie performances.

While “21 Bridges” does not give James the room to shine like “If Beale Street Could Talk” or “Race,” it definitely shows his versatility.

While Kitsch has a history of playing the bad boy figure in television shows like “Friday Night Lights,” his portrayal of Ray takes the blue ribbon for bad boy characters with the exception of his portrayal of David Koresh in “Waco.”

The criticism with “21 Bridges” will come based on its similarities to recent cop movies like “Black and Blue.”

And while “21 Bridges” is dope, “Black and Blue” is better because the latter is less predictable.

However, the intense violence will make “21 Bridges” stand out from other films with the same storyline, and makes it definitely worth checking out.